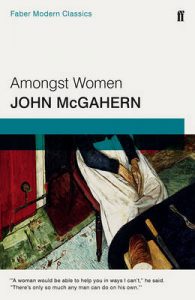 This is the latest in a series of occasional posts featuring books I read years ago about which I was wildly enthusiastic at the time, wanting to press a copy in as many hands as I could.

Amongst Women is the first John McGahern novel I managed to get through and only because I’d been commissioned to write a reading guide for it. I’d tried several others, including The Barracks, but found them just too bleak. You might wonder why I’m including it in this series, then, but the more I thought about it, the more I admired McGahern’s writing until I understood just what all the fuss was about.

Desperate to pull their dying father back from the brink, the Moran sisters decide to recreate Monaghan day, the day of his annual reunion with his old colleague McQuaid, the day when he always seemed at his best. An IRA veteran, so disenchanted that he now welcomes his Protestant neighbours, Moran has long exerted a powerful influence over his daughters, continually drawing them back to the family home despite their departures to Dublin and London and the beginnings of their own families. Not so their elder brother Luke who remains resolutely outside the family circle while their younger brother Michael struggles to free himself. This turbulent family is gently restrained by the presence of Rose, Moran’s second wife whose quiet forbearance has become the mainstay of the sisters’ lives. Written in spare yet sometimes lyrical prose, McGahern’s novel portrays a family tightly and painfully bound to a tyrannical patriarch.

Not my favourite McGahern – that would be That They May Face the Rising Sun – but it’s the one that converted me to his writing and that’s why I wanted to shout about it.