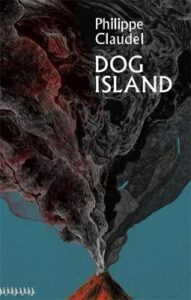 From Grey Souls, a novel about three murders set in First War France, to Parfums, his scent memoir, each book I’ve read by Philippe Claudel has been different from the others. What they have in common is a strong sense of humanity and all are beautifully expressed. Set on a tiny volcanic island in a remote archipelago on whose beaches the corpses of three young black men wash up, Dog Island is no exception.

The majority of men are not aware of their darker side, which nevertheless everyone possesses

The former teacher of the island’s school is taking her morning walk when she sees three dark shapes lying on the beach. Two other people have spotted this strange and unwelcome sight: a fisherman and an odd job man. They’re joined by the doctor and the mayor, closely followed by the island’s priest along with a few of his ever-present bees. All are concerned as to what to do, the mayor more worried about the effects on the island’s plans for a thermal baths complex than the tragedy laid out before him. Then the teacher turns up, aghast at any plan other than contacting the police. The more self-interested amongst the group scupper the teacher’s idea, dismissing him as a dangerous idealist and agreeing to dispose of the bodies discreetly. All are to remain silent about the corpses but the teacher cannot stifle his conscience, setting about his own investigations as to what happened to these poor young men. Something must be done if the mayor’s plans for the island are to be realised; the teacher must be silenced whatever the cost. Then a stranger turns up. What ensues leads to the ruination of both the island and its people.

Of course, it was not just the wind that played on their minds: the image of the corpses of the three drowned men were stitched to the inside of their eyelids

Claudel’s novel reads like a fable, a twenty-first century morality tale which explores the darker side of human nature: greed, self-interest, corruption and brutality. Adopting titles rather than names for his characters, Claudel underlines the universality of this story which shows the lengths apparently decent people are prepared to go to in order to protect their interests, the way in which mass hysteria can be manipulated and the compromises which we persuade ourselves to make rather than put ourselves in the firing line and do the right thing. The teacher stands out as a lone voice in all this and pays a heavy price. This is not a cheery read, as you may have gathered, although there’s a glimmer of grim humour at times, but it’s a salutary one, fitting for our times. We’d do well to take note of the islanders’ fate.