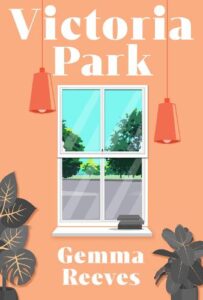 I’d already spotted Gemma Reeves’ Victoria Park in the publishing schedules before I was offered it for review. The first copy failed to materialise, caught up in the Covid/Christmas Royal Mail vortex that hit the headlines in December, but I’m pleased to say the second arrived before I had to resort to NetGalley, not my favourite way to read. Reeves’ debut is an evocative portrait of a London neighbourhood, following the intersecting lives of the people who live there over a year that’s mundane for some, dramatic for others.

Over the years, the streets around the park filled up with the well-to-dos. Architects, advertising people, lawyers. A couple of actors who’d been on the West End stage

One October morning, the air just beginning to chill, Wolfie prepares the salmon he’s been smoking for sixty-five years in the garden shed he built when he and Mona were newly-weds. It’s a secret recipe, much loved by the customers at the kosher deli he’s handed over to his Italian neighbour Luca. Luca always wanted to be a jazz musician but would have settled for staying on the family farm if his brother hadn’t sold it. He works hard at the deli, regulars popping in for treats – from the teacher who meditates every day under a tree to the portrait painter who persuades Luca’s sour but beautiful, neighbour to be drawn. Luca and his wife rarely see each other, thanks to her shift patterns, although Elena isn’t working as many nightshifts as Luca thinks. Their teenage son also has a secret, one which his girlfriend knows and enjoys. Like any neighbourhood, Victoria Park is not without its troubles – a young man, terribly injured by an acid attack, lies in a coma – nor has it escaped the relentless rise of property prices. As the year wears on, an affair will be ended, a body will be found, a wedding will be celebrated, a baby conceived and Mona will continue to lose her grip on the present.

You can go straight to a person’s core by finding out how they treat their cleaning lady. Any service staff, really

Reeves switches perspectives between characters, unfolding her intricately woven novel month by month. Structured like a set of tightly linked short stories, the result is a many-layered portrait of a community changing to accommodate incomers with their taste for vegan carrot cake and skinny lattes while still catering for those who prefer Luca’s cream cheese-laden bagels, unchanged since Wolfie’s day. Each character’s story is stitched in neatly, small details slipped in so that we learn the fate of those we’ve met in previous chapters, their lives often intersecting, sometimes unknowingly. Beautifully executed, Reeves’ novel is infused with a gentle humour, compassion and affection, as if these are people she knows well, and perhaps she does: her biographical notes describe her as living and working in London. Such an absorbing, enjoyable novel, and a reassuring comfort read for those who need one in this difficult winter.