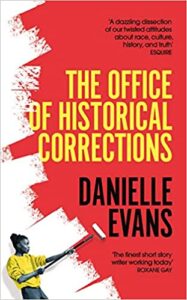 I’d not read anything by Danielle Evans before The Office of Historical Corrections turned up, although the title of her prize-winning, Before You Suffocate your Own Fool Self, had caught my eye. This second collection comprises seven stories, one lengthy enough to qualify as a novella, which explore racism in America and its complicated history.

“You have no idea how much you take for granted,” my mother told me the first time I’d brought a white friend home to play. But she was wrong about that – you take nothing for granted when the price of it is etched across the face of the person you love the most, when you are born into a series of loans and know you will never be up to the cost of the debt

As ever, I’ve picked out my favourite pieces beginning with Richard of York Gave Battle in Vain which sees Rena attending the wedding of a man she met when their plane was apparently contaminated. His bride-to-be seems intent on finding out if they slept together but what begins in suspicion ends surprisingly. In Alcatraz a woman has devoted her life to reversing the miscarriage of justice that landed her beloved grandfather in Alcatraz, haunted by cruel injustices of her own as a mixed-race child in a white family, injustices her daughter hopes to ameliorate. Anything Could Disappear sees Vera, about to start a new life in New York, finding herself looking after an abandoned child, later understanding her unexpected happiness may come at the cost of someone else’s grief. In Boys Go to Jupiter Claire allows her boyfriend to post a photograph of her wearing a Confederate flag bikini on Facebook which goes viral, the latest in a long line of actions she knows will aggravate her soon-to-be stepmother.

It was a revelation to move through the world with Nick, to see how little attention a white man needed to devote to that kind of performance, how much of his worry about how other people saw him could be consumed by the frivolous, how easy it was for me to be assumed respectable merely by association

The novella-length The Office of Historical Corrections is the name its employees affectionately call the Institute of Popular History, founded to correct the misinformation, inaccuracy and downright falsity endemic in Trump’s America. Cassie’s duties range from politely correcting tourists spouting nonsense to posting corrections on monument plaques. While Cassie is circumspect, her childhood friend and colleague, Genevieve, is forthright enough to get herself fired. When Cassie is called in to calm the ruffled feathers in the whitest town in Wisconsin, thanks to Genevieve’s final correction concerning an apparent lynching, her investigations lead to a surprising, deliciously ironic discovery which has the soberest of results.

She clasps a fist in his hair, which is thick and full, but they are at that age now, a few years older than the bride and groom, youth waving at them from the border to an unknown territory

Evans’ stories are delivered in a low-key deadpan style, often laced with a wry humour. Her characters are complicated, their lives fleshed out by backstories which explain their sometimes conflicted actions, avoiding facile simplification of a deeply complex issue. Race and its historical context is Evans’ overarching theme although one of the funniest stories, Why Won’t Women Just Say What They Want, takes a swipe at relationships between men and women as an artist’s public spewing of apologies to the many women he’s wronged in his life blows up in his face spectacularly. This is a sharp, funny and nuanced collection, made all the more sobering by reading it the week Confederate flag waving rioters invaded the White House in last days of the Trump regime.

12 thoughts on “The Office of Historical Corrections by Danielle Evans: ‘The past isn’t dead. It isn’t even past’”