Six Degrees of Separation is a meme hosted by Kate over at Books Are My Favourite and Best. It works like this: each month a book is chosen as a starting point and linked to six others to form a chain. A book doesn’t need to be connected to all the titles on the list, only to the one next to it in the chain. 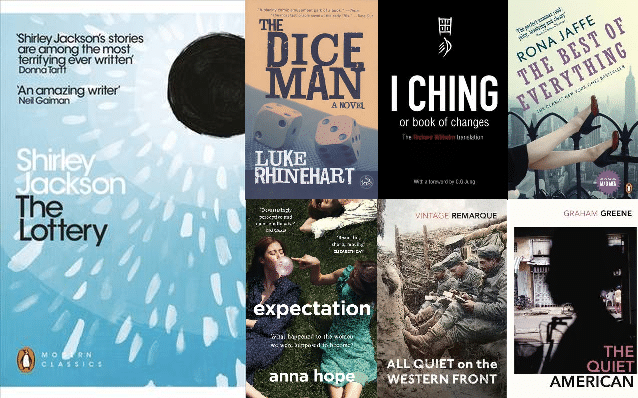 This month we’re starting with Shirley Jackson’s short story The Lottery which I haven’t read but I gather is about a small town whose annual lottery sees a citizen selected at random who meets a horrible fate. A suitably chilling choice for Halloween month.

Luke Rhinehardt’s ‘70s cult classic The Dice Man is all about chance as its main protagonist makes his decisions based on the throw of a die.

Leading me to the I Ching or Book of Changes, a divinatory text consulted by throwing six coins pointing to a reading, depending on how they fall.

The I Ching popped up in the TV series Mad Men as did Rona Jaffe’s The Best of Everything about four young women who arrive in New York in the 1950s, one of the many books read by the enigmatic Don Draper.

Exploring similar themes, Anna Hope’s Expectation follows three friends who share a house in London after graduation. Very different from both her previous novels, the first of which was set in the First World War.

Leading me to Erich Maria Remarque’s classic All Quiet on the Western Front which follows a young German boy from the schoolroom into the trenches.

Graham Greene’s The Quiet American is set in 1950s Indochina during the build-up to another war which a naïve young CIA agent is hoping to help prevent.

This month’s Six Degrees has taken me from a cult ‘70s classic to another classic set in ‘50s Indochina. Part of the fun of this meme is comparing the very different routes other bloggers take from each month’s starting point. If you’re interested, you can follow it on Twitter with the hashtag #6Degrees, check out the links over at Kate’s blog or perhaps even join in.