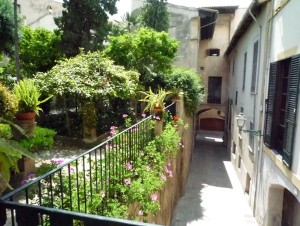 You know how it is when you come back from holiday: those old routines kick in and the lovely little interlude of rest, relaxation and novelty that seemed so vivid begins to feel like a distant memory. Writing a post has become a way of nailing some of those memories before they fade away so bear with me on this one. Quite a few reading disappointments but so lovely was Palma that it didn’t seem to matter

We last visited Majorca back in the ‘90s, staying in a small village inland. This time we based ourselves in the capital’s old town. It’s a beautiful place – quite small, although the maze of narrow streets lined with buildings built tall to keep out the blistering summer sun means that you can walk for ages without treading the same path twice. Despite Spain’s economic difficulties there’s a good deal of money in evidence – elegant tree-lined boulevards replete with expensive shops, lots of swanky hotels and restaurants, and some very smart people to match. Incomers, most probably – the store directory at both branches of Spain’s smart department store chain, El Corte Ingles, include Russian amongst its languages. I hope some of that money finds its way into the locals’ pockets. 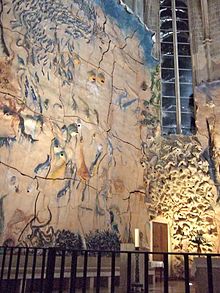 As for what we got up to – lots of loafing, ambling and a nice dash of culture. Palma’s cathedral had to be visited for the Gaudi restorations alone: strikingly original, and controversial at the time – unsurprisingly – although not nearly so odd as Miquel Barceló’s sculpture whose strangeness defies description. Other than that we visited the Fundació Pilar I Joan Miró A Mallorca, getting sweatily lost on the way but just about managing to keep our tempers. In the early ‘40s Miró escaped the Nazi invasion of France, fleeing to Majorca and settling there permanently in 1956. He already had strong connections with the island – his mother was Majorcan and he’d married a Majorcan woman in 1929. Both he and his wife, Pilar, wanted to leave his remarkable studio to the city of Palma and after his death Pilar was instrumental in setting up the Fundació. Set in beautiful grounds, the striking buildings alone are well worth a visit and there’s a changing exhibition of the work Miró bequeathed to his adopted city. Very enjoyable, but our favourite day was a trip on the rackety tourist train inland to Soller followed by lunch in a quiet courtyard tucked away from the crowded square which we’d both been fondly remembering as a sleepy backwater, then an hour or so wandering around the gorgeous Jardí Botànic and a bus trip home via the village of Deià, made famous by Robert Graves. One more dash of culture: a visit to Genesis, Sebastião Salgado’s stupendous collection of photographs exhibited at the La Caixa Foundation, run by Spain’s eponymous non-profit savings bank which turns out to have an admirable stance on corporate responsibility. How refreshing!

As for books – several disappointments, including Apple Tree Yard, I’m afraid. I know there’s a

lot of love out there for it but it seemed far too drawn out for me. My best read of the week was A. D. Miller’s The Faithful Couple which begins in 1993 with two young British men, Neil and Adam, who meet on holiday in California. They instantly click then both become involved in a dubious moral act which dogs Adam, in particular. The book follows their friendship over nearly twenty years, picking out the tensions between them – Neil’s resentment of Adam’s casual privilege, career ups and downs, marriage and children with their attendant worries – until 2011. It’s the kind of structure I find immensely appealing – lots of space for character development. The women characters, however, were a little two-dimensional and I wasn’t entirely convinced that Adam would find himself thinking of what happened in California every single day but on the whole it worked well. If you’d like to read a more considered review, nip over to Tales from the Reading Room.

That’s it for my holiday. I hope you have one of your own planned soon. Back to books on Friday.