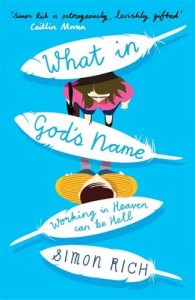 I’ve given up a lot of books recently. It used to feel like a moral failing leaving a book unfinished but I’ve finally realised that it’s a complete waste of time hoping that something which hasn’t gripped you by page 50 will eventually blossom. I’ve already confessed to giving up Flight Behaviour in Monday’s post and have since given up The Liars’ Gospel, The Tale of Raw Head and Bloody Bones and The Sea on Our Skin. Last night, feeling a bit desperate, I turned to Simon Rich’s What in God’s Name for a bit of light relief.

The eponymous God is the Lynyrd Skynyrd obsessed CEO of Heaven, fixated on the band reuniting despite the small problem that most of them are dead. He prefers fixing baseball games to preventing tsunamis and, fed up with endless human crises, decides to blow up Earth and set up a restaurant instead. Enter Craig and Eliza, two angels in charge of small miracles, determined to save the world. God sets them the challenge of successfully answering a prayer of their choice by the following month. They choose the prayers of two people who each want to end up with each other thinking it the most straightforward option but it appears that Laura and Sam are incapable of hooking up driving the angels to increasingly desparate measures. It’s short, sweet and very funny – just the thing for jaded readers. I’ve now moved on to Frances Greenslade’s Shelter, which I’m relieved to say seems promising.