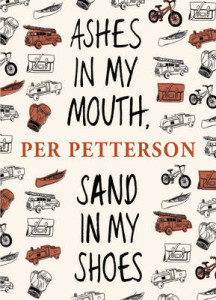 Those who’ve read and enjoyed Per Petterson’s Out Stealing Horses may be pleased to hear that his 1987 debut has been translated into English for the first time. Petterson is a master of the less is more writing style that I so admire and Don Bartlett has proved adept at keeping to the spirit of that in his translation – no mean feat for a man who also translates the wordy Karl Ove Knausgaard’s books.

Ashes in My Mouth, Sand in My Shoes is told from the point of view of young Arvid Jansen who some readers may have already met as a grown up in I Curse the River of Time. In the early 1960s Arvid and his family live in a working class Oslo suburb. His parents fight, his uncle has social aspirations but remains at a conveyor belt making toothbrushes soon to be joined by Arvid’s father, money is tight and drink a well-worn escape. I’ve seen it described as a short story collection but for me it read like a vividly episodic novella. Arvid has nightmares in which a tightly wrapped duvet becomes a nest of writhing snakes. He suddenly becomes aware of time passing and decides to stop the living room clock with disastrous consequences. He finds a way into a treasure trove of comics stored in a barn gaining the respect of the older boys and the nickname Death Diver. The Cuban Missile crisis looms large keeping him silent for four days. Along the way, idolisation of his father turns to a realisation of his fallibility and weaknesses. In clear, vibrant prose Petterson captures the world seen through the eyes of a young boy growing up into adolescence leaving me wanting to get my hands on a copy of I Curse the River of Time to find out what kind of 37-year-old Arvid turns out to be. Written with humour and great clarity, it’s a short but strikingly memorable read.

If your appetite’s been whetted for more fiction in translation I’d recommend a visit to Stu Allen’s blog. He’s a man who knows what he’s talking about.

4 thoughts on “Ashes in My Mouth, Sand in My Shoes by Per Petterson (transl. Don Bartlett): Growing up in 1960s Norway”