I know you’ve all get your minds on Christmas but I thought it might be time for a little taster of what 2015 has to offer before we get overdosed on carols and all that malarkey. It’s a good month, too. No huge names leap out for me but there are several interesting looking treats nevertheless.

I’ll start with the appropriately named debut, The Winter War,  by Finland’s answer to Jonathan Franzen according to its publishers but I’m not letting that put me off. Middle class Helsinki couple Max and Katriina appear to have a perfect life but as we all know that can’t be true. Katriina no longer loves Max, their adult daughters both have problems and as he nears his sixtieth birthday, Max strides off into dangerous territory. It’s compared to ‘a big, contemporary, humane American novel, but with a distinctly Scandinavian edge’ which sounds just the ticket to me.

Jonas Karlsson’s The Room is about Bjorn (bit of a Scandi theme going on here, I know) a discontented bureaucrat who finds a secret room in his office in which he feels wonderfully empowered, performing to the exacting standards demanded by the Authority with ease. Everyone else, however, denies its existence. It’s an intriguing idea which could easily backfire but it sounds worth a try.

I remember reading Emily Woof’s first novel, The Whole Wide Beauty, and not getting on with it very well but I like the sound of The Lightning Tree enough to give her another try. Set in Newcastle in the mid-1980s it’s about Ursula, raised on big ideas and keen to start the adventure of adult life, and Jerry, a class warrior with an altogether different sort of upbringing, who fall in love with each other. She heads off to India while he goes to Oxford – will their relationship survive? Recommended for fans of both The Line of Beauty and The Marriage Plot, – two very different novels, make of that what you will – it’s described as ‘lyrical and funny’.

Ben Lerner’s 10:04 is another title that could go either way. Jonathan Franzen describes it as ‘hilarious…cracklingly intelligent…and original in every sentence’, apparently, but as you may have noticed I’m not a fan of Mr Franzen. It sounds a little like an early Paul Auster which is where the attractions lies for me. Narrated by Ben, a writer who has just secured a big advance after the ecstatic reception of his first novel and is now writing his second narrated by ‘Ben’, 10:04 ‘charts an exhilarating course through the contemporary landscape of sex, friendship, memory, art and politics’, apparently. Not lacking in ambition, then.

Let’s end with what I hope will be a highly entertaining nineteenth-century romp, the wonderfully named Lucy 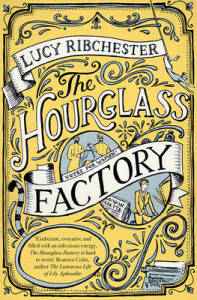 Ribchester’s debut  The Hourglass Factory, which takes us to the circus with the equally wonderfully named Ebony Diamond, trapeze artist, tiger tamer and suffragette, who’s stage getup includes the tightest laced corset you’ve ever seen and certainly wouldn’t want to experience. When Ebony disappears mid-performance, intrepid girl reporter Frankie George – fascinated with all things circus-related – is determined to find out what’s happened to her. Sounds like a rip-roaring tale, just the thing for fireside reading.

That’s it for January books. As ever a click on a title will reveal more information at Waterstones website and if you want to know what I’m hoping for in my Christmas stocking just click here.