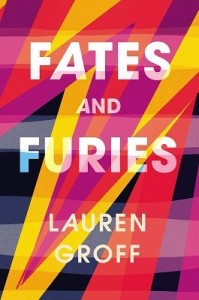 I’m not a natural Lauren Groff fan. The writing I most admire is the pared back prose of Colm Tóibin, Kent Haruf and John McGahern – Groff’s is baggy, extravagant, almost baroque at times, yet there’s something about it that sucks me in. I read The Monsters of Templeton when I was a reviews editor, not really expecting to enjoy it but needing to decide to check it out, and found myself transfixed. Fates and Furies is the portrait of a marriage and if you’ve read Groff before you’ll know that this isn’t just any run-of-the-mill, everyday sort of marriage: Lotto and Mathilde are a shiny beacon of the perfect relationship but as we all know that can’t be true, and what a dull novel it would be if it was.

Fates and Furies begins with the glittering image of Lotto and Mathilde, freshly – and secretly – married at twenty-two then switches to Lotto’s story. He’s the son of the beautiful Antoinette and Gawain, tall, hirsute and lonely but rich on bottling Floridian water. Gawain dies young, leaving a grief-stricken Lotto to go off the rails with the local riff-raff – on whom he will never quite turn his back – before being sent off to boarding school. College brings hopes of acting – his aura of specialness and generosity of spirit drawing women irresistibly to him. At his final performance as Hamlet he and Mathilde meet in the most dramatic of circumstances, marrying a mere two weeks later. Their life together unfolds in a series of parties. Lotto’s acting career flounders but another more brilliant future lies ahead. Just over half-way through the novel the perspective shifts to the seemingly unknowable Mathilde whose story is quite different from what we have been led to believe. A childhood tragedy has left her bundled up like a parcel, passed from one distant relative to another, left to find her own surprising way. Lotto’s and her apparent coup de foudre may not be quite what it seems. The smile she always takes care to wear hides something much more complex and more interesting.

The novel’s two-part structure – first the Fates then the Furies – sets us up for dramatic revelations, presenting an apparently perfect marriage seen through both parties’ very different eyes. It’s stuffed full of little side stories, some of which go nowhere, some of which are picked up again and sewn neatly in. Shakespearian and fairytale elements sit well in the context of Lotto’s work not to mention the title with its nod to Greek mythology. There’s a healthy seam of feminism running through the book – ‘Somehow, despite her politics and smarts, she had become a wife, and wives, as we all know, are invisible’ – and Mathilde’s character is much the more satisfying of the two. It’s also about appearances and reality: there’s a striking image of a passerby who glances into a house and sees the Satterwhite family singing at Christmas in the glow of a fire ‘the very idea of what happiness should look like’ when the opposite is true. There’s a great deal to admire but a few irritations, too: the bracketed interpolations at first seem witty but eventually pall and at nearly four hundred pages, it needs an editorial trim. That said it’s an absorbing, intriguing and satisfyingly complex novel: the self-consciously iconoclastic English teacher’s discussion of drama and comedy at Lotto’s school fits it well. Another curate’s egg, then, but a much tastier one than last week’s Up Against the Night.

9 thoughts on “Fates and Furies by Lauren Groff: A much tastier curate’s egg”