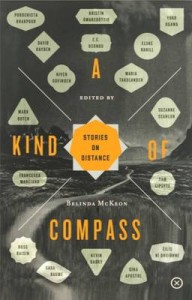 Regular readers may have noticed that I’ve taken to reviewing short stories recently but this is my first anthology. Previous reviews have all been of collections by a single author, one whose novels I love. Two things brought me to A Kind of Compass: firstly it’s edited by Belinda McKeon both of whose novels – Solace and Tender –captivated me, and secondly it includes a story by Sara Baume whose gorgeously poetic, Costa Prize shortlisted debut Spill Simmer Falter Wither rates alongside Tender as one of my books of this year. I should say that there’s a common theme to this collection, subtitled ‘Stories on Distance’, which McKeon discusses in her introduction, describing ‘distance’ as an obsession that she had hoped to ease by commissioning seventeen others to write about it for her, ranging far and wide to find them. It didn’t work, apparently. Hard to review an anthology without the whole thing becoming a list so please forgive my cherry picking four favourites from those I’ve read so far.

Yoko Ogawa’s ‘Six Days in Glorious Vienna’ (translated by Stephen Snyder) covers the distance between Japan – from where her two characters travel – to Vienna, one to celebrate her twentieth birthday and the other to visit her dying lover, now a very old man. These two are strangers to each other but by the end both have covered more emotional miles than they have physical. It’s a beautifully expressed story with a wonderful twist at its end.

Kevin Barry’s narrator has taken fifteen years to travel from Ireland to Spain in ‘Extremadura (Until Night Falls)’. Ignored by all but the village mutt, the narrator watches the evening’s comings and goings, thinking of home and whether his family is still waiting for him, watching the local heartbreaker and nursing his own broken heart which has led him from a settled life to a tramp’s ostracism. Barry was awarded this year’s Goldsmiths Prize just a few weeks ago for Beatlebone and if the almost casually lyrical style of this story is anything to go by, it’s well deserved.

Sara Baume’s ‘Finishing Lines’ opens with the kind of image that I loved in Spill Simmer Falter Wither, comparing homing pigeons to ‘tiny, shaved-headed men in high collars, their arms shoved down inside their shirts’. Leaving her nine-month-old baby and her boyfriend behind, Baume’s narrator travels to London to rescue one of her great-uncle’s pigeons who has lost her way from St Malo and landed in Bethnal Green. Staying with an old friend overnight, our narrator realises quite how far she’s travelled since her old student days.

In E. C. Osondu’s ‘The Place for Me’, Tochi wonders why his brother parties so hard when he comes home to Nigeria from his job in London. Tochi’s determined to join his brother in what he and his friends see as the land of opportunity, managing to finagle a visa and finally arriving in Peckham where the gulf between what he’s seen on TV and the actuality becomes horribly clear.

I’ve leant not to gulp collections down whole so can’t vouch for all seventeen stories but what I have read suggests that McKeon has a sharp eye for talent, although I’d guessed that after reading the Amy Bloom quotation in her introduction. Now, there’s a woman who knows how to write a short story.

4 thoughts on “A Kind of Compass (Edited by Belinda McKeon): A little cherry picking”