Given that I nicked this idea from Kim over at Reading Matters, an Australian blogger, albeit one living in the UK, it seems

only fair to round up five books I’ve read by Australians. I should say I’ve read considerably more Australian fiction than that but these are five novels I’ve particularly enjoyed. The last three are linked to a full review.

David Malouf’s Remembering Babylon begins on a sweltering day in the mid-nineteenth century with a strange and ragged figure dancing out of the bush and into the lives of a small group of white settlers. Gemmy Fairley has spent almost sixteen years living with indigenous Australians. At first his eccentricities are greeted with amusement but as the settlers attempt to impose their own kind of order on an environment they see as hostile, many of them find Gemmy’s presence both unsettling and threatening. Where do the loyalties of this man, who is white like them but seems to have more in common with aboriginal people, lie? Every word counts in this slim, dazzlingly vivid novella.

Most British readers would probably name Peter Carey if pushed to come up with an Australian author. I can’t say that I’ve enjoyed all Carey’s novels but one stands out for me, so good I’ve read it three times: the 1988 Booker Prize-winning Oscar and Lucinda. The gawky, misfit, son of a preacher, Oscar Hopkins stumbles upon a method of paying his way through his theology studies, becoming an obsessive but successful gambler, convinced that he’s following God’s will. Equally the misfit, Lucinda Leplastrier, unexpectedly in possession of a large fortune and the proprietor of a glassworks, is well aware of the scandalous nature of her gambling addiction. When these two meet on board a ship bound for Australia, they form an unlikely bond which results in a calamitous misunderstanding as both wager their futures on a fantastical glass church. Set against the backdrop of nineteenth-century colonialism Oscar and Lucinda is a wonderfully witty, vibrant pastiche of a Victorian novel. 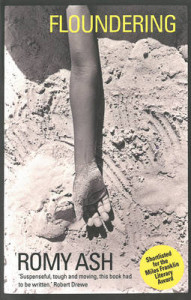 sons who she’d left on their doorstep a year ago because ‘things just got complicated’. They’re on the road for days: what’s needed along the way is shoplifted; they sleep in the car; the heat is suffocating; insects bite mercilessly but Tom, who narrates the novel, manages to remain cheerful although increasingly uneasy and at times downright scared. He and his older brother bicker while Loretta – never to be called Mum – chivvies them, often hungover, sometimes drinking at the wheel. They finally arrive at a campsite where Loretta slowly unravels, the heat bounces off everything and their next door neighbour can’t stand to have little boys around. Things go from bad to worse. Through Tom’s voice, Ash manages to capture the panicky fear of an eleven-year-old unsure of what his increasingly chaotic and unpredictable mother will do next.

Dominic Smith’s The Last Painting of Sara de Vos is a tightly plotted, inventive novel through which run three timelines: the titular Sara’s seventeenth-century narrative, the theft of her painting in the 1950s and the preparations for an exhibition in Sydney in 2000. In 1957, a beautifully executed copy is substituted for the only extant de Vos painting which has been in the de Groot family for centuries. Marty de Groot’s investigations take a somewhat unorthodox route leading him to Ellie Shipley, a PhD student turned conservator who – decades later – will become the acknowledged expert on de Vos, her career celebrated in an exhibition which will have the de Groot’s painting as its centrepiece. Still in a private collection, its owner is delivering the work himself. Then a collector in Leiden offers the same painting to the gallery’s director. Smith deftly weaves the story of the painting and its creator through Ellie and Marty’s narratives, linking all three satisfyingly together in this entertaining literary page-turner.

I’ll end this with a novel that I hope grabbed more attention in Australia that it seemed to here in the UK. Jennifer Down’s debut, Our Magic Hour, follows twenty-four-year-old Audrey for just over a year after her best friend Katy kills herself, exploring the devastation of grief and loss through a group of young people, suddenly made aware of their own vulnerability. When her dearest friend dies, it’s Audrey who looks out for everyone else while her partner tries to take care of her. Down’s novel is a masterclass in elegant understatement. Her writing is so restrained that, like Audrey, we’re brought up short when details let slip alert us to her state of mind. Its quiet intimacy draws us into her circle making the loneliness of her life all the more wrenching but it can also be very funny: This could easily have been an overwhelmingly bleak book but Down steers it neatly clear of that. The result is a very fine novel indeed – compassionate, clear-sighted and lovely.