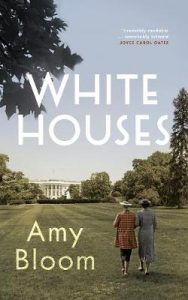 I’ve yet to read anything by Amy Bloom that I’ve not loved. Her writing is both deft and empathetic, pressing all my literary buttons. Hopes were extraordinarily high, then, for White Houses but they were surpassed to the extent that this post is in danger of degenerating into one long gush. Spanning a weekend in April 1945, shortly after the death of Franklin D. Roosevelt, Bloom’s novella tells the story of his wife Eleanor and Lorena Hickok, the woman who joined them in the White House.

Hick waits at Eleanor’s New York apartment on Washington Square just three days after Roosevelt’s death. Once caught up in a passionate affair, these two women still love each other dearly. It’s to Hick that Eleanor turns for comfort, solace and help with the sacks stuffed with condolence letters. Wary of accusations of bias, Hick gave up a promising career as a White House reporter when she took up residence, instead traveling the country and reporting to Federal Emergency Relief Administration on the desperate conditions wrought by the Depression. She’s no stranger to poverty but what she saw appalled her. Both Hick and Eleanor share memories of a childhood marked by the loss of their mothers but whereas Eleanor’s was cushioned by privilege, Hick’s was scarred by negligence and worse, bowdlerised to spare Eleanor’s sensitivity. When Roosevelt was elected, Hick joined them in her own spartan apartment  – Eleanor tacitly accepting her husband’s mistresses while he returned the favour. Hick remains long after their ardour has cooled. Theirs is a deep and lasting love which continues until Eleanor dies in 1962.

Bloom narrates this elegantly spare novella through Hick’s dry, earthy sometimes humorous voice, painting a picture of ‘30s and early ’40s America through the lens of her experience. Both Hick and Eleanor are vividly drawn: Hick’s sharp-eyed view of Eleanor’s need for approbation and moral probity – so hard for those around her to match and at times, so exasperating – contrast with her passion and tenderness for her lover. The storytelling is engrossing and evocative – Hick’s description of her brief time with a travelling freak show is a particular delight. It’s an extraordinarily intimate portrait, both of the two women and of Roosevelt’s presidency, and the writing is sublime, often conveying a great deal in a couple of well-chosen words. I could fill this post with quotes but here are just a few favourites:

Eleanor’s love was like some shabby old footstool. Everyone used it without wanting it and no one ever gave it a moment’s thought

I wouldn’t call it nagging. It was like having the Statue of Liberty watch you have one beer too many

Sometimes, I love her more when I don’t even see her

He was the greatest president of my lifetime and he was a son of a bitch every day… …He broke hearts and ambitions across his knee like bits of kindling, and then dusted off his hands and said, Who’s for cocktails?

From its brief opening sentence to its gloriously poetic, heart-wrenching final paragraph, this is an extraordinarily accomplished piece of fiction. Bring on all the prizes.