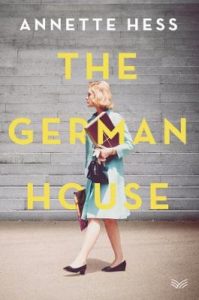 Just enough new novels in December to fill a post, two of them in translation beginning with Annette Hess’ The German House, set against a backdrop of the 1963 Frankfurt war crimes trials. The war’s a dim memory for 24-year-old Eva, keen to start her new life with her wealthy fiancé. When an American investigator offers her a job as a translator, she finds herself questioning both her family’s role in the horrors of the past and her own future. Hess’ novel is one of three published to launch, HarperVia, a new literature in translation imprint from HarperCollins. Always happy to see more of that and if It Would Be Night in Caracas is anything to go by it’s a list to keep an eye on. That’s a stylish jacket, too.

Anne Catherine Bomann’s Agatha was a bestseller in Germany, apparently, but was originally published in Denmark. A 71-year-old psychiatrist with no family or friends is eagerly awaiting retirement when a young German woman walks into his clinic and demands an appointment. He finds her fascinating, beginning a joint course of therapy with her which forces him to confront his fear of intimacy according to the blurb which sounds very promising to me.

Angela Meyer’s Joan Smokes is a mere 76 pages, apparently, more a short story than a novella although it won this year’s Mslexia Novella Award. Set in the ‘60s, it’s about a woman who arrives in Las Vegas determined to reinvent herself. Calling herself Joan, she gets to work on her appearance – choosing red lipstick and dying her hair – but turning her back on her past may not be so easy. ‘This city of flashing neon, casinos and shows is full of distractions. Finding a job will be quick and easy. Things to do. New people to meet. A clean sheet. She’s certainly not thinking about Jack, or … No. Not any more. Her new life starts right here, right now’ says the blurb. I rather like the sound of this one.

I’m finishing the last new title post for 2019 with Etaf Rum’s A Woman is No Man. Eighteen years 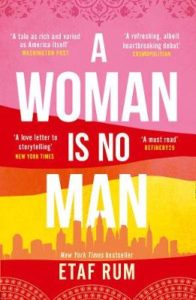 after her mother left Palestine, betrothed within a week, Deva finds herself facing a string of suitors in Brooklyn, arranged by her formidable grandmother whose care she has been in since her parents were killed in a car crash. Shocking truths are revealed, apparently, forcing Deva to question everything she thought she knew about her family. ‘Three generations of Palestinian-American women living in Brooklyn are torn between individual desire and the strict mores of Arab culture in this heart-wrenching story of love, intrigue and courage’ say the publishers. The New York Times described it as ‘a love letter to storytelling’.

As ever, a click on a title will take you to a more detailed synopsis should you want to know more. Paperbacks soon…