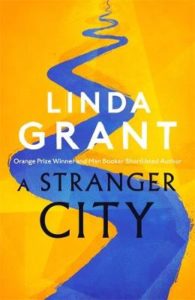 Early summer, which seems so very long ago now, was packed with literary goodies for me, particularly May which began with A Stranger City, Linda Grant’s portrayal of a post-referendum London through a set of disparate characters brought together by their connection with a woman whose body has been pulled from the Thames. Each character’s story is subtly woven through the others’ into a bright tapestry – some of it ragged and frayed – of a city Grant clearly loves but about which she’s deeply concerned. Her book reveals a London which is always in flux, shaping and reshaping itself to fit the constant flow of people drawn to it – a Brexit novel if ever there was one. I ended Part One by saying I’d try to avoid politics in the next instalment but as you can see, I’ve already failed.

Flotsam, May’s second favourite, is by Meike Ziervogel, the founder of Peirene Press. Set on the German coast in the 1950s, this strange, unsettling book is a beautifully expressed exploration of the legacy of war and the grief it brings through the story of a young girl and her mother. Told in often lyrical yet spare, clean prose, first from Trine’s perspective then Anna’s, it’s the briefest of novellas yet it provokes more thought than many books three times its length. Far from an easy read but certainly a rewarding one, Ziervogel’s book leaves much for readers to deduce and is all the better for it.

Vesna Main’s Good Day? sported the second jacket I fell in love with this year, fitting its book as perfectly as the gloriously pink cover of Aylet Gundar-Goshen’s Liar, which popped up in Part One. Always a joy when publishers use an image which is both strikingly original and 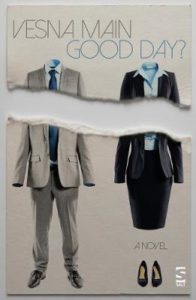 appropriate. Main’s Good Day? recounts a daily conversation between a Writer and her Reader, who is also her husband, describing the progress of her novel about a couple whose marriage is strained to breaking point. It’s such a clever piece of writing and a daring one, too. To write a novel almost entirely in dialogue and carry it off as well as Main does requires quite a degree of chutzpah. Thoroughly deserving of its place on this year’s Goldsmiths Prize shortlist.

May’s last choice is much more straightforward, a piece of fictionalised biography which introduced me to a someone I’d never come across but who turned out to be an internationally popular figure. Eva Meijer’s Bird Cottage is based on the life of Len Howard who, aged forty, threw up her life as a violinist in London and took herself off to Sussex to pursue her lifelong passion for birds, determined to devote herself to researching their habits. Using simple, clean prose, Meijer lets her subject tell own story, weaving through it observations of Star, one of Howard’s favourites. A delightful book, the story of a true English eccentric.

June began with another piece of fictionalised biography by Jill Dawson who often chooses that form for her work. When I read that The Language of Birds was based on the notorious Lord Lucan affair my heart sank but far from being a rehash of the infamous murder replete with the usual speculation as to Lucan’s fate, Dawson’s book reimagines the story from the nanny’s perspective. Her careful, compassionate and compelling novel honours Sandra Rivett’s memory, tipping the balance away from a media which reduced her to ‘the lovely young nanny’ rather than a vibrant young woman with a life of her own. For me, it’s one of Dawson’s best, and that’s saying something after The Crime Writer, a wonderful piece of literary fan fiction starring Patricia Highsmith. 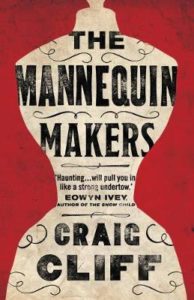 The first half of 2019’s books of the year ends with Craig Cliff’s The Mannequin Makers, an inventive and imaginative piece of storytelling which takes its readers from 1902 to 1974 with a tale of castaways and mannequins, the like of which had never been seen before. Not just one story but several nested within each other, this is a novel haunted by madness and grief with more than a touch of the gothic brightened with moments of humour. Absolutely gripping – I loved it.

All of the above are linked to my reviews here if you’d like to know more. Part Three takes us into high summer with the return of Jackson Brodie after a nine-year hiatus, a tale of love, jealousy and betrayal in the Bauhaus and another beautiful jacket, perfect for its book’s contents. If you missed the first quarter on 2019’s favourites and would like to catch up, it’s here.