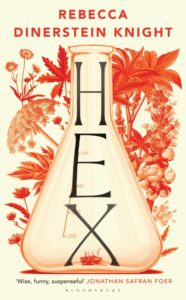 Spare a thought for poor publishers who’ve been wrestling with the nightmare of rejigging their schedules to give their books the best possible exposure now that bookshops are shut thanks to the corona virus. Poor authors, too, left in limbo with all that nervous excitement at the prospect of the longed-for publication day now delayed. The result of all that is a much-depleted new title post, more like a December preview than May.

Unusually for me, I’ve already read three of the four remaining May novels beginning with Rebecca Dinnerstein Knight’s Hex, a six-cornered love story with a botanical twist. It takes the form of three notebooks written over six months by Nell Barber addressed to her advisor, Dr Joan Kallas, for whom she’s conceived a passion without entirely recognising its nature. Five years ago, I reviewed The Sunlit Night by Rebecca Dinerstein, as she was known then, describing it as ‘a quirky bit of escapism’, a description which fits Hex nicely, too.

I’ve also already read Lily King’s Writers & Lovers, unable to resist Elizabeth Strout’s description of it as ‘Gorgeous’. This warm, witty novel is about a young woman, lost in grief and mired in debt, with one sure thing in her life: the novel she’s been working on for six years. I thoroughly enjoyed it – one of those satisfyingly absorbing books you can wrap yourself up in and forget about the world, much needed right now.

I’ve yet to read Catherine Lacey’s Pew in which the eponymous character wakes up in a church unsure of their identity, gender or otherwise. Pew won’t speak, unable or unwilling to answer the many increasingly strident questions put to them by the town’s people. ‘As the days pass, their insistent clamour will build from a murmur to a roar, as both the innocent and the guilty come undone in the face of Pew’s silence’ says the blurb of what sounds rather like a fable. I’m not at all sure about this one but I’ve enjoyed Lacey’s previous novels, Nobody is ever Missing and The Answers.

I’m finishing with the book which will launch what looks like an interesting collaboration between Walter Presents, All

4’s excellent subtitled TV stream, and Pushkin Press, publishers of very fine foreign fiction. David Foenkinos’ The Mystery of Henri Pick is set in a small Brittany town whose library is full of rejected manuscripts one of which is published by a young editor to great acclaim but it seems its author is dead causing a great deal of suspicion. ‘By turns farcical and moving, The Mystery of Henri Pick is a fast-paced comic mystery enriched by a deep love of books – and of the authors who write them’ says the blurb. Having read it, I’d say it’s the perfect choice for the Walter Presents/Pushkin Press partnership.

That’s it for May’s new novels. The smallest handful, I’m afraid. A click on a title will take you to a more detailed synopsis should you want to know more. Reviews of Hex, Writers & Lovers, and The Mystery of Henri Pick to follow shortly. Paperbacks soon, and let’s hope there are more of them…