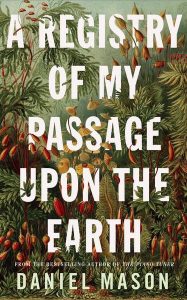 Historical novelist Daniel Mason’s name will be well known to many readers, I’m sure. I remember The Piano Tuner causing quite a stir when it was published back in 2002 but it didn’t appeal to me. You might wonder, then, why I picked up A Registry of My Passage Upon the Earth but its multitude of different settings made it an attractive prospect, given I’m unlikely to be travelling in reality any time soon. Mason’s collection takes its readers from Ancient Egypt to twentieth-century Rio de Janeiro and many points in between, each piece pleasingly prefaced with an illustration from an appropriate historical source.

Four of the nine stories that make up this collection stood out for me. Ironically, given that travel yen, the first is set in Bristol, a ten-minute train ride away in the normal run of things. Death of the Pugilist, or the Famous Battle of Jacob Burke & Blindman Mcgraw is the tale of a young nineteenth-century stevedore, groomed for the fight of his life against an old, celebrated bruiser which reminded me a little of Anna Freeman’s Bristol-set novel, The Fair Fight all about eighteenth-century female boxing. The Ecstasy of Alfred Russel Wallace sees the young, self-taught Wallace in the midst of an expedition. Flattered by his correspondence with Charles Darwin, Wallace has written a letter to his hero and is distressed by the lack of response, attributing it to his own stupidity while the truth is entirely different. Leaping forward to twentieth-century California, a man remembers his Polish immigrant uncle and his inexplicable passion for Civil War enactments in which he willingly played an unpopular role in The Union Dead. On the Cause of Winds and Waves, &c takes us up into the skies, delivering a surprise as a female balloonist seeks to recreate her vision of an apparent rent in the sky, this time with a witness.

Fifteen years in the writing, much of Mason’s collection explores history, science and a thirst for knowledge often through the perspective of outsiders. Many of his stories are vivid, memorably capturing both the theatre of nineteenth-century pugilism and the astonishing richness of the natural world Wallace encounters. There’s often a playful humour underpinning their themes – a doctor’s increasingly frequent seizures which result in a better version of himself much to his wife’s delight in The Second Doctor Service is particularly pleasing. Just one piece didn’t work for me and that was the titular story about the Brazilian schizophrenic artist Bispo do Rosario which took the form of a catalogue of found pieces from which he made his art. It certainly conveyed a disordered mind but a little too incoherently for my taste although Cathy at What Cathy Read Next loved it. An interesting collection, full of colourful images whose jacket fits it beautifully.

14 thoughts on “A Registry of My Passage Upon the Earth by Daniel Mason: Stories of history, science, discovery and outsiders”