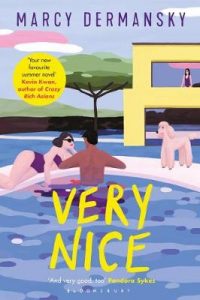 July’s paperback publishing schedules are looking a little more tempting than previous few months’ did, so depleted by cuts and postponements. I’m relieved not to be a magazine reviews editor these days, suddenly faced with all that white space opening up. They, along with publicists, must have been tearing their hair out. This month, I’m pleased to say, there are enough titles for two posts, all of the first batch I’ve yet to read.

I’m beginning with Marcy Dermansky’s Very Nice which sounds and looks as if it has its feet firmly planted in summer reading territory but Roxanne Gray’s description of it as ‘a vicious little novel, smart, efficient mean, full terrible people behaving terribly… …Absolutely delightful’ is intriguing. Rachel Klein enjoys kissing her creative writing professor despite never intending to do so. Zahid Azzam had no intention of staying in Rachel’s palatial Connecticut home but that’s what he does. Becca Klein didn’t intend to embark on an affair with her daughter’s professor but… … you get the picture. ‘An ingenious blend of sex, secrets and betrayal, Very Nice is a sharp, compulsive take on modern life from one of America’s most exciting novelists’ say the publishers and Gray clearly agrees.

I’m in two minds about Nell Zink’s Doxology having not entirely enjoyed her previous books but the synopsis makes it sound very attractive. It follows two generations of an American family, one either side of 9/11. The first are members of a punk band, two of whom have an unplanned child, Flora. Zink follows the grown-up Flora into the world of conservation with all its political and personal challenges. ‘At once an elegiac takedown of today’s political climate and a touching invocation of humanity’s goodness, Doxology offers daring revelations

about America’s past and possible future that could only come from Nell Zink, one of the sharpest novelists of our time’ say the publishers. We’ll see.

Regina Porter’s The Travelers is about two families – one Irish-American, the other African-American – beginning in 1942 as America recovers from the Second World War. ‘Illuminating more than six decades of sweeping change – from the struggle for civil rights and the chaos of Vietnam to Obama’s first year as President – James and Agnes’s families will come together in unexpected, intimate and profoundly human ways. Romantic and defiant, humorous and intellectually daring, Regina Porter brilliantly explores how race, gender and class collide in modern-day America – and charts the mishaps and adventures we often take to get closer to ourselves and to home’ according to the publishers which sounds right up my literary alley.

As does Salvatore Scribona’s The Volunteer which spans four generations of fathers and sons, beginning in 1966 when Vollie Frade enlists in the US Marine Corps to fight in Vietnam. ‘From the Cambodian jungle, to a flophouse in Queens, to a commune in New Mexico, Vollie’s path traces a secret history of life on the margins of America, culminating with an inevitable and terrible reckoning. Scibona’s story of a restless soldier pressed into service for a clandestine branch of the US government unfolds against the backdrop of the seismic shifts in global politics of the second half of the twentieth century’ say the publishers promisingly.

I’m rounding off this batch with Téa Obreht’s Inland, an exploration of  the history and myths of the American West through frontierswoman Nora and Lurie, a former outlaw, apparently. ‘Mythical, lyrical, and sweeping in scope, Inland is grounded in true but little-known history. It showcases all of Tea Obreht’s talents as a writer, as she subverts and reimagines the myths of the American West, making them entirely – and unforgettably – her own’ say the publishers. It’s been nine years since Obreht won the then Orange Prize for Fiction with The Tiger’s Wife which I loved so hopes are high for this one.

That’s it for the first July paperback preview. As ever a click on a title will take you to a more detailed synopsis for any that have snagged your attention, and if you’d like to catch up with July’s new novels they’re here and here. More soon…