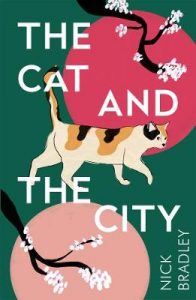 Everything about Nick Bradley’s The Cat and the City appealed to me: its jacket, structure, setting and, yes, that cat. Set in Tokyo, Bradley’s episodic novel follows a set of characters through their teeming city as it prepares to play host to the Olympics, each of whose lives are touched by a very particular cat: a stray apparently just passing through.

The novel opens with a young woman commissioning a detailed tattoo of Tokyo which will cover her entire back. The tattooist is reluctant, eventually coming to relish the task which takes him years to complete. On the last day, he spots a cat within his design, a cat he has no memory of including. Next we meet a homeless man led to an abandoned hotel by the cat he now feeds tuna on its daily visits. Once a renowned storyteller, Ohashi lost his reputation and marriage to drink but worst of all abandoned his dying daughter. Ohashi leads us to his estranged brother, a cab driver with his own sad story which he keeps to himself. One night, Taro picks up three young people, one of them abusively drunk from whom the other two make a getaway. All three are working in PR, writing material for the Olympics some of which will need translating by a passenger of one of Taro’s colleagues whose translation of Copy Cat, a short story by her literary idol, we read later in the book. And so it goes, each one of these characters interlocking with another in ways many of them are unaware but all linked by that cat in one way or another.

The cat gave off purrs of pleasure, like a car engine idling at a red light

It’s not clear, at first, how Bradley’s characters relate to each other which had me wondering if the whole thing would hold together but patience pays off as his novel reveals itself to be an elaborate and satisfying jigsaw. The cat flits in and out of each of their stories, even making an appearance in the manga which a young boy draws for the agoraphobic man he befriends, brought together by its injury. It’s feline of very unusual qualities but this is a spoiler-free zone so you’ll have to work out what they are for yourself. Altogether a smartly put together piece of fiction, an absorbing bit of storytelling with a pleasingly redemptive ending. It includes a Japanese word that many of us will relate to:

Tsundoku – a word that required a sentence in English: buying books and piling them up on shelf without reading them

Bradley ends his novel on the day of the opening ceremony of the Olympics which, thanks to Covid-19, won’t happen in 2020 but I think we can forgive him for not imagining that the world would have turned upside down by the time his novel was published.

14 thoughts on “The Cat and the City by Nick Bradley: A most unusual feline”