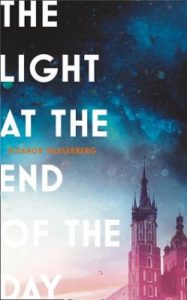 You might remember Eleanor Wasserberg’s debut, Foxlowe, which caught my attention on Twitter a few years back, although not enough for me to read it. Two things drew me to her second novel: first the art theme running through it, always a lure for me, and secondly its Krakow setting. The Light at the End of the Day draws on Wasserberg’s own family history – half remembered stories she wishes she’d paid more attention as she says in the touching letter that accompanied my proof – telling a tale of a family lost to each other and the portrait commissioned on the eve of the Second World War.

Alicia Oderfelt is her father’s favourite, hardly a beauty although he often tells her so. For her twelfth birthday, he takes her for a celebratory dinner at a grand restaurant where they receive all the respect a rich family would expect but on the way home he’s humiliated in an anti-Semitic attack horrifying Alicia who plays along with his excuses at home for the family. Shortly after her birthday the Oderfelts invite Jozef, the young artist commissioned to paint Alicia’s portrait, to join them at one of their celebrated salons, eager to show off the view of Karkow’s imposing castle from their gorgeously decorated apartment. Over the months that follow, Jozef swallows his pride, glad to have won this bread and butter commission, finding Alicia a patient subject with her own artistic flair while admiring her older sister’s thoughtful presence. Meanwhile, the city looks on as Kristallnacht plays out over the border until complacency gives way to panic. Even as the Oderfelts push their children into their car, packed with their belongings, German soldiers are marching in the streets. What happens that day will unravel their complicated family leaving a mystery, part of which will remain unsolved until the twenty-first century.

This is a wonderfully atmospheric novel, summoning up the pre-war grandeur of Krakow beautifully. Wasserberg vividly contrasts the richness of the Oderfeldts’ lives before the occupation with the hardship and the horror of their separate fates after their attempt to escape. The passages in Lviv reminded me of The House with the Stained-Glass Window in which the Second World War is yet another episode in the benighted history of a city, claimed first by one country then another. No literary fireworks here, just an absorbing, immersive story well told, although the resolution of the mystery surrounding the portrait in 2009 was a little too neat for me.

Inevitably, Wasserberg’s novel brought back memories of visiting Krakow last summer on our Polish jaunt but more so of our first foggy November visit, well over a decade ago. We spent a day in Kazimierz, the area Alicia’s mother refers to as ‘the old neighbourhood’ across the river from the main city, where we visited a photographic exhibition devoted to absence – deserted shtetls, crumbling synagogues, places stripped of their Jewish communities. It remains one of the most eloquent testimonies to the Holocaust I’ve come across.

11 thoughts on “The Light at the End of the Day by Eleanor Wasserberg: Portrait of the artist as a young girl”