This October’s publishing schedules has fewer attention-grabbing novels than I’d hoped, given all the slipping and sliding earlier in the year but perhaps November’s Christmas sparklers will be brighter. I’ll begin with Bill Clegg’s The End of the Day. I read his first novel, Did You Ever Have a Family, back in 2015 when it was published here in the UK and enjoyed it very much although I’m not sure it met with universal acclaim despite his standing as a respected literary agent. Perhaps he’ll do better with his second which sees a widow unexpectedly visited by a friend she’s not seen for forty-nine years, a man finding his estranged father collapsed on the floor of the hotel in which he was to be introduced to his grandchild and a phone call to a cab-driver reminding her of her traumatic past. Clegg’s novel explores the connections between these three disparate characters in ‘a feat of storytelling, capturing sixty years within the framework of one fateful day’ according to the publishers, whetting my appetite nicely.

Unsurprisingly, three characters are the focus of William Boyd’s Trio, set in the summer of 1968, about the making of a movie in Brighton, a world away from the Martin Luther King and Robert Kennedy assassinations of that year. The titular trio comprises a producer, a novelist and an actress who become increasingly focused on each other until it all becomes too much, apparently. There was a time when a new Boyd on the horizon signalled a treat in store for me. Not so in recent years but that premise sounds very tempting.

I haven’t yet read Sigrid Nunez’s The Friend but I gather from many whose opinions I trust I’ve missed a treat. What Are you Going Through seems to explore similar themes of friendship and grief through a woman with terminal cancer who asks her friend to help her to die promising ‘to make it as fun as possible… …What follows is an extraordinary tale of a friendship put to the greatest test: to witness, unflinching, its end. It is also a portrait of the way we live now, in a world endlessly troubled by crises, and the dramatically changing nature of human relationships in our time’ say the publishers of a novel that sounds well worth investigating although maybe I should read The Friend first.

Clarissa Goenawan’s The Perfect World of Miwako Sumida has an intriguing premise. Set in contemporary Japan, it follows the eponymous Miwako’s closest friends and family as they try to piece together the jigsaw of her life after her death in a remote village. ‘Together, they realise that the young woman they thought they knew had more going on behind her seemingly perfect facade than they could ever have dreamed’ say the publishers. Only her best friend knows her true identity, apparently. I do like the sound of that. 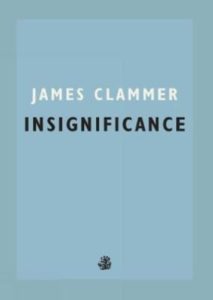 James Clammer is already established as a children’s author although I have to admit his name is new to me. The lovely Galley Beggar Press are publishing, Insignificance, his first novel for adults in which Joseph is trying to concentrate on the plumbing job in hand but can’t keep his mind off his family, distracted by what he believes are his son’s murderous intentions. ‘Placing the reader right inside the head of its struggling narrator, it works double time, both as an act of empathy a taste of the uncertainty and awkwardness of one vulnerable man, and his relationship with the world and also as a tense, emotional and gripping drama’ according to the blurb which sounds both riveting and claustrophobic.

That’s it for October’s new novels. A mere handful but several of them sound very tempting to me. As ever a click on a title will take you to a more detailed synopsis. Paperbacks soon…