After five failed attempts, largely due to bad timing, a broken wrist, oh, and the pandemic, we finally managed to get away for a couple of days hardly believing our luck having snapped up two nights in the New Forest B&B I’d been eyeing up for some time. Not only that but the weather looked lovely, always a consideration when planning a British holiday particularly one to be spent mostly outdoors.

In the new world, spontaneity is out of the window so we booked a slot at Stourhead several days before we set off, calling in on our way to the Forest. Autumn is the perfect time to see this landscaped garden designed by its original owner Henry Hoare. Vivid splashes of red and gold against a background of evergreens, trees not yet turned and a brilliant blue sky made a spectacular sight. The house

itself isn’t much to write home about, just a plain old Palladian mansion with little to mark it out, but with its many vistas opening up across the lake, the garden is a work of genius, justifying Hoare’s nickname, ‘Henry the Magnificent’.

The much anticipated ponies were spotted as soon as we entered the Forest. I knew they would be having visited several times before although not for quite a while. When ponies decide to amble down the street, or on one 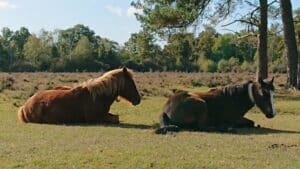 occasion a small band of determined donkeys, drivers have to put up with it. Charming if you’re a tourist but a tad infuriating for the locals in a hurry, I imagine. H’s favourite pigs are a rarer sight but lovely to see rooting amongst the trees on the sole occasion I glimpsed them from the car.

We managed two walks during our short stay, both glorious. On the first we met a chap from Southport who told us all about the colony of red squirrels at the bottom of his and his neighbours’ gardens, fiercely guarded against grey ‘tree-rats’ as he called them. On

the second we were treated to the gutteral sound of stags fighting deep in the woods, competing for females. A bit too gladiatorial for me, even at a safe distance, so we left them to it rather than attempting to track them down.

The afternoon of our first day was taken up with a visit to the pretty seaside town of Lymington whose cobbled streets down to the harbour reminded me a little of Lyme Regis. It was pleasing to see that Lymington seemed to be doing well with relatively fewer

shops closed than in my own home town. No independent bookshop that I could see but the local Waterstones was busy.

The B&B was all I’d hoped it would be but staying anywhere these days is necessarily very different from the ‘before times’ as a friend calls it. We were sent a list of things in advance that the owners would put in our room for us if we wanted, no one but us was to enter the room during our stay and our breakfast was left outside the door. None of it a hardship but all of it a reminder, if one was needed, of the difficult times we’re living through. My heart goes out to those working in the hospitality trade, having to think their way inventively around these difficulties while knowing that they’re putting themselves at risk. Daisybank‘s owners did it beautifully as did all the cafés and restaurants we ate in.

And the book? I was already most of the way through Rhidian Brook’s excellent The Aftermath which explores the period immediately after the Second World War through a British officer who chooses to share the Hamburg palatial house requisitioned by the army for his family rather than evict its owner. All the more interesting after finding it’s based on Brook’s family’s experience. Many thanks to Kate over at Books are My Favourite and Best whose review put me on to this one.

A thoroughly enjoyable, restorative break, then. My favourite moment has to be the pony crossing the road at the zebra crossing ahead of us as we were walking to supper on our first evening. Honestly, I’m not making that up! Back to books on Wednesday…