I owe this post to H who came up with the idea when we were out walking one day, I can’t remember when or where. At first I dismissed it, rather snottily it has to be said, but by the time we were home I’d become quite enthusiastic and already had five striking openers all of which, I’m pleased to say, I’d remembered accurately apart from one and you’ll know why if you stick with me to the end of the post. 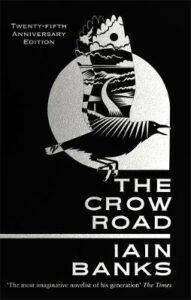 It was the day my grandmother exploded

The first that sprang to mind is from The Crow Road, my favourite Iain Banks novel which tells the story of the McHoans through Prentice, home from university and faced with a host of family troubles. When his father dies in a freak accident, their differences unresolved, Prentice knows it’s time to shape up. He learns to deal graciously, if painfully, with his brother’s successful career and happiness with the lovely Verity. When an old friend uncovers some leads about his missing uncle, Prentice can’t resist following them no matter how shocking the outcome or how dangerous the path. Part thriller, part family saga, part coming-of age-novel, The Crow Road is one of Banks’ warmest and most accessible books.

It was the afternoon of my eighty-first birthday, and I was in bed with my catamite when Ali announced that the archbishop had come to see me

The opening sentence of Anthony Burgess’ 1981 Booker Prize-shortlisted Earthly Powers has stayed with me for a very long time. Allegedly based on Somerset Maugham’s life, it’s narrated by Kenneth Toomey, a respected novelist looking back over a life which has taken him from literary Paris and the glitz and sometimes sordid glamour of Hollywood in his youth to a long retirement on Malta. Toomey is a Catholic whose sexuality runs counter to the Church’s teachings, a man who’s witnessed the murder of a beloved friend and faced evil in Nazi concentration camps, concluding that it’s a trait innate in humanity. In contrast, his brother-in-law, a Catholic priest, sees evil as a force in the world. My lasting impression is of a very complex, erudite and rather self-consciously clever piece of fiction with a page-turning pace. 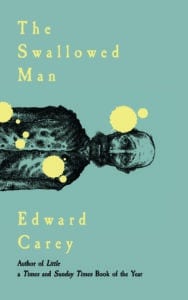 I am writing this account, in another man’s book, by candlelight, inside the belly of a fish

It’s not surprising that this one’s stayed with me given it’s the opening of a book I’ve recently read but it’s such a striking image I think it’ll linger a while yet. It comes from Edward Carey’s Pinocchio-inspired, adult fairy tale, The Swallowed Man, in which Geppetto is swallowed by a fish while on the hunt for his lost son, a fish so gigantic it has a schooner already in its maw. Finding candles sufficient to last many days together with writing and painting materials on board and a box of matches in his trouser pocket, he decides to record his story and that of the son he carved from wood. Not a book I’d usually have picked up but I loved Little, Carey’s story of Madame Tussaud, and while The Swallowed Man is not its equal, it’s still worth reading for Carey’s admirable powers of invention.

This is the saddest story I have ever heard

So begins Ford Maddox Ford’s The Good Soldier which lives up to its introduction. For nine years John Dowell and his wife Florence have travelled to a German spa town with their friends, Edward and Leonora. Both Florence and Edward suffer from heart conditions which it’s hoped their annual trips will ameliorate. Neither of their marriages are happy. Infidelities, power struggles and lies abound. While John appears to be the most injured, he’s clearly an unreliable narrator of this tale of marital misery, death and insanity. Not a cheery read, then, but at least its author gives us fair warning.

I’m sure you won’t be surprised to hear that it was only the first twelve words of The Tale of Two Cities’ long opening sentence that had firmly lodged in my brain. They were words that frequently popped into my head in the early days of the pandemic as we walked in glorious weather through beautiful countryside quiet enough to hear the birdsong usually drowned out by traffic, having socially distanced chats with strangers. Set against the backdrop of the French Revolution, Dickens’ novel tells the story of Charles Darnay, an exiled French aristocrat, and Sidney Carlton, a rather dodgy lawyer, both in love with the daughter of a political prisoner incarcerated in the Bastille for eighteen years. There’s another equally familiar line towards the novel’s end in Carlton’s redemptive speech which begins It is a far, far better thing that I do, than I have ever done.