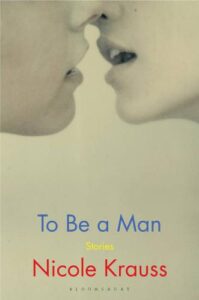 Nicole Krauss’ The History of Love was one of those novels you couldn’t get away from when it was published here in the UK back in 2006. I loved it. Since then I’ve read several novels by Krauss but none have quite matched it for me, including the smartly clever Forest Dark. That didn’t deter me from snapping up her first collection of short stories, To Be a Man, which explores the many and various relationships between men and women.

From my walks alone in Geneva, I already understood that the power to attract men, when it comes, arrives with a terrifying vulnerability

As ever, I’ll pick out a few favourites to give a flavour of this collection of ten stories, most satisfyingly lengthy, which span several continents. The opening piece, Switzerland, sees a woman watching her twelve-year-old daughter, so sure of herself she faces down the male attention she’s already attracting, reminding her of Soraya, the sexually adventurous young woman she knew when she spent a year in Geneva aged thirteen. A woman visits the Tel Aviv flat left to her by her beloved father in I Am Asleep but My Heart is Awake and is astonished when a stranger lets himself in, claiming to be her father’s friend, who takes good care of her while treating the flat as his own. In Amour the passion shared by a couple is not enough to sustain one of them when the consideration of a friend throws a beam of light on her lover’s nature. The Husband, my favourite of the ten, is about a daughter deeply suspicious when her widowed mother accepts the man Tel Aviv social services present to her as her lost husband, a man the rest of the family seems to accept unquestioningly much to her consternation, then a crisis shifts her view. Only one didn’t quite work for me, the titular story which explores masculinity through two very different men in separate sections which didn’t quite gel.

A woman living on her own is not a condition that required the emergency airlift of a man, she wants to argue, on the contrary

These are intelligent, thoughtful stories, some played out against a backdrop of dramatic events – a rapidly moving bush fire, a refugee camp, in the shadow of 9/11 – spanning many parts of the world from Tel Aviv to Kyoto, Latin America to New York. Most of Krauss’ narrators are women, their relationships with sons, fathers, brothers, husbands, and lovers explored through strong and independent voices, exposing the tensions between the sexes. All inhabit carefully constructed vibrant worlds in which we’re immersed for a short time. Each story is sufficient unto itself, flowing easily from one to the next although one stood out as a little different for me, perhaps because of its male narrator: In the Garden sees a troubled personal secretary to ‘the best landscape architect in Latin America’ contemplating the extent of his own silent complicity in the acquiescence of the man he so admires in their country’s brutal regime. A great piece, although it seemed to belong to another collection somehow. Altogether a thoroughly accomplished set of stories which I hope will be the first of many from Krauss.

16 thoughts on “To Be a Man by Nicole Krauss: Men, women and the tensions in between”