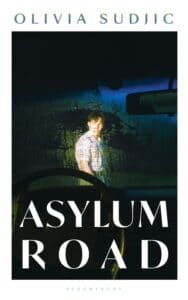 Olivia Sudjic’s Sympathy has been on my TBR list for as long as it’s been published. No idea why I haven’t got around to buying a copy but when I spotted Asylum Road in the publishing schedules I put my hand up, attracted partly by the multitude of glowing puffs from the likes of Megan Hunter and Daisy Johnson. Sudjic’s novel follows Anya who finds herself engaged to Luke during their Provencal holiday rather than alone after the break-up she’d anticipated.

Our arguments were mostly silent, or silent on his side. Often in the dark, lying in bed so neither face could see the other. Not an argument then but a pressure

Anya and Luke have been together for five years having met at the wedding of a mutual friend. They’ve been to many more since – Anya craving the security she imagines marriage would offer despite Luke’s apparent lack of interest. Anya left Sarajevo when she was a child having endured much of the long siege some of us may remember seeing covered by TV news bulletins in the ‘90s, feeling like voyeurs. She’s half-heartedly in the midst of a PhD thesis, working a variety of part-time jobs which leave her dependent on Luke. Theirs is a tricky relationship: Anya constantly navigating Luke’s moods and taciturnity, beset with paranoia and self-consciousness, aware that Luke is in control. When he produces a ring, she feels relief but no joy. A trip to Cornwall to plan the wedding with Luke’s parents only exacerbates her feelings of being an outsider. She decides she must introduce Luke to the family she’s barely visited since she went to live with her aunt in Glasgow. Once in the Balkans, the balance of power tilts subtly – Luke doesn’t understand the language or the nuances of Anya’s relationships with friends and family. Shortly after their return, he suggests they take a break, the first in a series of crises that will see Anya’s grip on reality loosening.

Weddings seem like hubris and perhaps they invite disaster. But I wanted the institution of marriage. To change my surname to Luke’s and be shielded by it

Sudjic’s novel is extraordinarily powerful. Anya’s voice is careful, her constant efforts to interpret Luke’s silences and unexplained absences indicative of this strained, unhealthy relationship in which one craves the security she hopes will anaesthetise her trauma while the other seems incapable of connection. Her disarray is eloquently conveyed – her forgetting of crucial objects, not least her engagement ring, her painful anxiety and feelings of not belonging, discomfiting. Sudjic’s writing is elegantly spare, a great deal left unsaid yet vividly evident. Words are very important in this novel, each one carefully chosen. As Anya’s frail control slips, so her mind becomes more disordered and her behaviour more rash. It’s an impressive piece of fiction, thoroughly deserving of all that glowing praise heaped upon it.

27 thoughts on “Asylum Road by Olivia Sudjic: ‘Noli me tangere’”