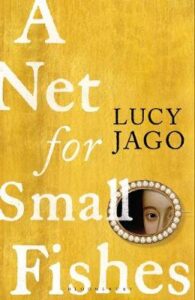 The seventeenth century isn’t my usual literary stomping ground but two things attracted me to Lucy Jago’s first novel: the theme of female friendship and a glowing puff from Andrew Miller whose own historical fiction I love. Beginning in 1609, A Net for Small Fishes explores the intimate bond between Frances Howard, the daughter of one of the kingdom’s most powerful families, and Anne Turner, an ambitious doctor’s wife, against a background of court intrigue.

As another of my faults is not to know my place as well as I should, I stepped forward.

Anne is called to dress the Countess of Suffolk’s distraught daughter who is married to the Earl of Essex. Anne has a reputation for style and Frances’ mother is determined that her daughter will seduce the Earl whose impotence and brutality have driven Frances to distraction. Theirs is a marriage designed to consolidate the power of the Howard family, known for its extravagance in stark contrast to the Earl’s austerity. Moved by Frances’ plight, Anne spots an opportunity to gain entrance to the court despite the counsel of her husband, wary of its reputation for intrigue. As their friendship deepens, Anne becomes increasingly concerned for this young woman, fourteen years her junior, who is clearly falling in love with the king’s favourite and he with her. When her husband dies, Anne is cast out of her comfortable home, impoverished yet still devoted to Frances who is intent on marrying the man with whom she’s besotted, incriminating both herself and Anne in her efforts to overcome those who oppose her. Meanwhile, courtiers are watching, the balance of power shifts and advantages are sought. Almost seven years after Anne entered the bedchamber of her dearest friend, she’s on trial for her part in death of the man who stood between Frances and happiness.

Narrated through Anne’s voice, Jago’s atmospheric novel vividly evokes the Jacobean seventeenth century in all its stinking sumptuousness. Plots, intrigue and conspiracies abound in a court ruled by a man who seems more interested in his silkworms and his current favourite’s beauty than this country which is not his home. Central to the novel is the friendship between two strong, intelligent women, each from very different strata of society but both hampered by their lack of independence. Without a man to support her, Anne is bereft of status, dangerously close to pauperism despite her connections, her sharp intelligence and her savvy political grasp. Frances’s beauty is a useful tool in the armoury of a family whose determination to strengthen its power base comes at a great cost to her. As Jago makes clear in her author’s note, both women were subjected to vile, misogynistic portrayals and it was this that made her want to rescue them from notoriety while not exonerating them from their part in what became known as the Overbury Plot. I couldn’t help thinking of a certain American president when reading about Jacobean powerplays and intrigue, presided over by a capricious head of state. What a relief that’s over.

15 thoughts on “A Net for Small Fishes by Lucy Jago: Love knows no bounds”