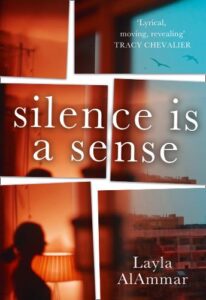 I’m not sure what it was about Layla AlAmmar’s Silence is a Sense that made me put my hand up when I spotted it in my Twitter timeline. It’s not one of those titles which seem to be tweeted every half hour or so, although it certainly deserves that kind of exposure. Told through the voice of a narrator whose name we only learn at its end, AlAmmar’s second novel is about a twenty-six-year-old Syrian woman, silenced by trauma, now living in an apartment block in an unnamed British town.

Our narrator’s apartment is so close to the towers opposite she can see through her neighbours’ windows. She spends much of her time watching them, giving them names in her head, from the health-obsessed Juicer to No-Lights-Man whose constant rifling of the contents of the box kept under his bed begins to obsess her. The flat that most concerns her houses a family of four, the father often loudly drunk, his self-effacing wife suffering the consequences. Our narrator has been granted asylum, having survived the dangerous journey from Aleppo. She has no idea what’s happened to her family, fleeing the consequences of her political activism alone. She’s compartmentalised her trauma but memories leak into her nightmares: the appalling atrocities witnessed; the loss of friends; the exploitation and abuse endured along the migrant route to the UK. She keeps herself occupied reading, writing her pieces for the editor of The New Press and watching her neighbours, speaking to no one. When the local mosque holds an open day, she reluctantly attends. Many listen attentively to what the imam has to say, enjoying the festive array of food on offer, but there’s racism in the air. Shortly after, she witnesses something in an apartment which culminates in a dreadful act of violence. Despite her determination to keep herself apart and safe, she can no longer simply be an onlooker.

This is an extraordinarily powerful novel, chastening in its exploration of our own understanding, or the lack of it, of the experience of those fleeing brutal regimes, no matter how sympathetic or well-meaning we might be. The descriptions are often graphic, hard to read but unimaginable to live through and yet people do. Our narrator’s trauma is eloquently conveyed, our own need to have it condensed into a neat, sanitised story cleverly encapsulated in the constant requests for her to share her memories with her readers, urged by her editor to keep politics out of her pieces. Not an easy read, then, but far from an unremittingly grim one either. Despite the violence which triggers our narrator’s contact with her neighbours that contact is a beneficial one, breaking through the protective carapace she’s built around herself so that she takes her first steps towards becoming involved, once again, in working towards a better world. It ends with hope tempered with realism, and perhaps that’s the best kind. Such an impressive novel: so good, I’ve included it on my Women’s Prize wishlist.

13 thoughts on “Silence is a Sense by Layla AlAmmar: Giving voice to the voiceless”