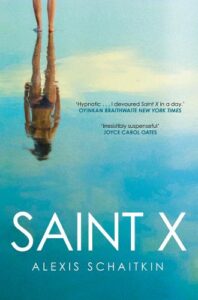 Alexis Schaitkin’s Saint X suffered more than most from the upheavals which struck last year’s schedules, appearing in print nine months or so after it was first due to be published. Truth be told I wasn’t at all sure about it when it arrived. I wondered if it might be a step too far into crime or, perhaps, beach read territory for me but given that it’s published by Picador, one of my favourite imprints, I thought I’d give it a try. Spanning several decades, Schaitkin’s debut explores the fallout of a young woman’s death while on a family holiday in the Caribbean.

The sea transforms to liquid silver as the day draws to a close. Sunset yields to the lavender fleece of twilight. Stars blink awake.

For the Thomas family, their trip to Saint X is an escape from New York’s bitter winter. Their older daughter, Alison, has just started college. Beautiful, apparently assured and idolised by her seven-year-old sister, Claire, she sneers inwardly at her parents’ attempts to be friendly to their luxury resort’s staff. Edwin and Clive patrol the beach, serving cocktails to this new batch of wealthy Americans – Edwin the charming extrovert, Clive his bumbling counterpart. These two live the other side of the island, a different world from the one the Thomases temporarily inhabit. Unbeknownst to her parents, Alison sneaks out at night, leaving Claire to wonder what she’s up to, until on the last night she doesn’t come back. Suspicion inevitably falls on Edwin and Clive. Many years later, now in her twenties and living in New York, Claire spots Clive’s name on her cab driver’s license. Over the course of that winter, Claire is pulled back into her childhood, researching Alison’s death online, listening to her audio diaries and stalking Clive until at last a surprising connection is made.

She was what all the dead are: whatever the living make of them

Inevitably, given its premise, there’s a thread of suspense running through this sophisticated,  skilfully constructed novel but it’s much more about the psychological effects of Alison’s death on all those involved, some of them tangentially, than solving the mystery of what happened. Schaitkin tells this story of obsession and grief, largely from Clive and Claire’s perspectives, carefully fleshing out the backstories of her characters. Her social observation is acute, from the chasm between the islanders and the well-meaning tourists keen to show how liberal they are to the reality TV shows that plumb the depths of human prurience in their depiction of missing girls. Both Claire’s obsession, sparked by her chance encounter, and Clive’s wrecked life are compassionately portrayed.  A little reminiscent of Jon McGregor’s Reservoir 13 in its overarching theme, Saint X is an impressive, thought provoking and immersive novel whose ending is well done, both expected and unexpected.