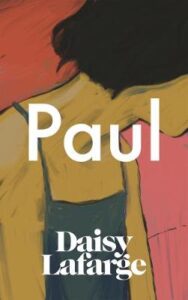 Despite the fact that I rarely read poetry, I’m a sucker for novels by poets hence the attraction of Daisy Lafarge’s Paul which also promised a vicarious trip to France, somewhere I’m unlikely to visit in reality for a while. Spanning four weeks of a hot summer, Lafarge’s debut follows Frances who has volunteered to work on a sustainable farm in the Pyrenees having left Paris under a cloud.

Beyond these, in the distance, the land veers up again into mountains, pale purple, biting the skyline like a row of delicate teeth

Frances has been working as a research assistant for the professor who supervised her dissertation at home in the UK. She’s a medieval historian, partly attracted to Paul’s farm because of its proximity to a magnificent cathedral. Paul is late to meet her and not quite what she expected. He’s eager to tell her about his travels in the South Pacific, recorded in a series of photographs he proudly shows her, proclaiming himself an anthropologist rather than a farmer. He introduces her to his friends, all blow-ins with colourful pasts. As the week wears on, the over-familiarity that has made Frances uneasy with Paul becomes an assumption of intimacy which she seems unable to resist. It’s to Paul she turns when her next volunteering stint ends prematurely. He whisks her off on what becomes a road trip from the Alpes-Maritimes back to the Pyrenees, visiting old friends each of whom seem a little distant with Paul until one of them warns Frances in such a way she can no longer deceive herself.

A week’s worth of conversations, glances and accidental touches swim in my mind. It feels like the events of my time here have been out of my control, a succession of waves breaking over me

Lafarge confirms the Gaugin connection alluded to by her novel’s beautiful cover and its title in her acknowledgements which tell us she drew on the artist’s Tahitian journals. Decades older than Frances, Paul is controlling yet exuberant, eager to shower her with love in a way that would set off warning signals immediately for a more experienced less vulnerable woman. Frances is fleeing an incident with her supervisor that is never quite explained after a breakdown close to the end of her dissertation. Lafarge narrates her novel from Frances’ perspective, alluding to her past rather than explicitly explaining it so that we get the impression of a naïve young woman who fails to understand what’s happening to her despite the astonishment of several of the people she encounters at her inability to take control of her own life. It’s a powerful story but the most enjoyable aspect for me was Lafarge’s summoning up of the French countryside in gorgeous descriptive language. A beautifully expressed novel, at times uncomfortable to read.