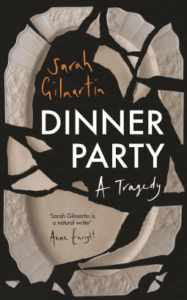 I started seeing Sarah Gilmartin’s Dinner Party in my Twitter timeline a good eight or nine months before it was due to be published, something that tends to put me off more often than not, but I liked the sound of this novel that begins with the titular gathering then explores the fraught family dynamics leading up to it. That may sound a wee bit hackneyed but Gilmartin’s smartly turned out debut steers well clear of cliché.

Things had been strange for a while now. Life was blurry; each morning the sun rose in a muslin veil. The small stuff was more to the centre, somehow, taking up all the space, blunting her capacities

Every year the Gleeson family meets at Halloween, the anniversary of Elaine’s death, but this year is a little different. Sixteen years after her twin’s death, and still bereft, Kate has decided to host a dinner party for her two brothers and her sister-in-law in the flat she knows she will shortly be leaving. As they settle round the table, enjoying the food Kate has so carefully prepared, talk turns to their mother; Peter defending her as ever, Ray and his wife Liz dismissing his excuses for her irascibility. When they’ve gone, earlier than expected, Kate counts the number of bites she’s taken. Aged thirty-three, recently dumped by her weaselly married lover, engaged in work well below her capabilities and with few friends to turn to for support, Kate is catapulted into a crisis, not the first she’s suffered. Her third year at university saw her hospitalised for the anorexia that had offered an escape from the constant nagging pain of loss and her mother’s angry litany of criticism. A year later, another dinner party marks the seventeenth anniversary of Elaine’s death but this time things are different for all three siblings.

But a twin can never get over a twin. It was like someone asking you to forget yourself

Gilmartin’s novel explores the well-trodden literary ground of family tragedy with which I’m sure she’s very familiar in her day job reviewing debuts for The Irish Times, but she does it refreshingly well. Bookended by the two dinner parties, each very different from the other, Kate’s story reveals her mother to be a domineering figure whose living children will never please her, fuelled by a sour anger which has eaten away at each of them in different ways. Lots of room for cliché here but Gilmartin neatly avoids that, spicing her novel with a little dark humour now and again. Kate’s distress and her avoidance of it is entirely believable, her tyrannical mother well drawn rather than the two-dimensional figure she could easily have become. Altogether an assured debut which lived up to all that pre-publication brouhaha for me.

22 thoughts on “Dinner Party by Sarah Gilmartin: A tragedy”