Back from London (more of that later in the week) with the tiniest handful of paperbacks to look out for in November, the first of which I’ve read already. Arlene Heyman’s Artifact follows biologist Lottie from her ‘50s childhood through to the ‘80s, still faced with professional barriers thanks to her gender despite a career grounded in careful research. Heyman handles her subject lightly lacing it with humour but never losing sight of the fact that being a scientist for Lottie is very much harder than it is for her male colleagues, unencumbered by childcare and treated with more respect. I thoroughly enjoyed this novel which explores the nitty-gritty of gender inequality, both at home and at work.

I remember Mary Gaitskill’s This is Pleasure being all over my neck of the Twitter woods last year. A mere 96 pages, it could almost be termed a short story rather than a novella but packs quite a punch by the sound of it. It examines the downfall of a male publisher thanks to allegations of sexual impropriety and harassment whose female friend tries to make sense of his behaviour. ‘Mary Gaitskill has spent her whole career mining the complexity of human relationships on both an individual and societal scale with wisdom and grace. Here her insights are more piercing and timely than ever’ say the publishers. Very keen to read this one.

Told in a series of vignettes taking its readers back and forth between the US and the Middle East, Zaina Arafat’s debut, You Exist Too Much, is the story of a young Palestinian-American woman, from her awkward teenage years to young adulthood when she moves into a Brooklyn apartment with her girlfriend, a settled life which soon becomes unsettled. ‘Opening up the fantasies and desires of one young woman caught between cultural, religious and sexual identities, You Exist Too Much is a captivating story charting two of our most intense longings – for love, and a place to call home’ say the publishers promisingly.

The premise of The Decameron Project is very appealing. Commissioned by The New York Times Magazine in March 2020, the world in the grips of 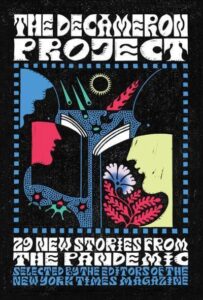 Covid-19, it’s a collection of short stories inspired by Boccaccio’s classic which comprised 100 stories told by a group of young men and women waiting out the Black Death in the hills above Florence. This version is made up of 29 stories on the pandemic theme from a list of authors ranging from Margaret Atwood, Kamila Shamsie, Colm Tóibín and Tommy Orange to the less well known such as Laila Lalami and Etgar Keret both of whose writing I’ve enjoyed.

That’s it for November’s paperbacks. Quite an interesting bunch if a little sparse. As ever a click on a title will either take you to my review or to a more detailed synopsis and if you’d like to catch up with November’s new fiction, it’s here and here.

18 thoughts on “Paperbacks to Look Out For in November 2021”