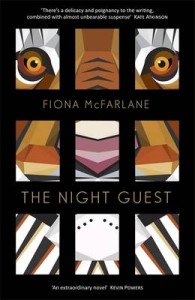 Old women are not a particularly common subject for contemporary fiction. They’ve been memorably portrayed in several books I’ve read by established authors – Helen Dunmore’s Enid in Burning Bright, Liz Jensen’s Gloria in War Crimes for the Home and Lesley Glaister’s Trixie in The Private Parts of Women for instance, and Angela Carter’s sassy twins, Dora and Nora Chance in Wise Children were a delight – but it’s not a description which captures agents’ or publishers’ commercial attention, I suspect, although it’s surely an interesting area to explore. A brave move then to make a seventy-five-year-old widow the main protagonist of your debut, but Fiona McFarlane carries it off brilliantly in The Night Guest.

It opens dramatically with a tiger stalking the Australian beachside house where Ruth lives. She senses him, smells him – her cats are disturbed, clearly frightened. Struggling out of sleep, she’s more curious than afraid, waking her bemused son in New Zealand to tell him about it. With both sons working abroad, Ruth lives alone in the holiday home to which her late husband Harry wanted them to retire. How convenient when a young woman arrives – first seen struggling over the sand dunes with her suitcase, then appearing without it – sent by the government as a carer for Ruth. Frida assesses Ruth’s needs, suggesting that an hour a day will suffice for now. Her sons are relieved, accepting the situation on the barest of information. Slowly, Frida takes more chores upon herself – the shopping, the cooking even the banking – dropped off and picked up by the mysterious George. To reveal much more would be to spoil the plot but suffice to say that McFarlane’s use of suspense is subtle, increasing incrementally and unsettlingly rather than bludgeoning her readers with white knuckle stuff. Much of my enjoyment lay in the way that McFarlane builds Ruth’s character: her childhood on Fiji, the daughter of missionaries; her teenage passion for her parents’ assistant Richard and their delight in each other when he visits after more than fifty years. The vividness of these memories make her increasingly confused state and her attempts to make sense of it all the more poignant. Frida is also deftly drawn, the contradictions of her small cruelties and kindnesses adding to the unsettling tension and doubt. For me, The Night Guest is what is so often called an ‘assured debut’, my second of the year after last week’s outstanding Ghost Moth. I can’t finish this without mentioning The Night Guest’s stunning jacket. So often books are let down by their covers but this one is strikingly vivid: it makes you want to pick it up and start reading immediately. Which is surely the point.

9 thoughts on “The Night Guest by Fiona McFarlane: Tiger, tiger burning in the night”