A new Zadie Smith novel is always the cause of a great deal of pre-publication anticipation. Twitter has been all agog for some time ensuring that Swing Time will turn up in quite a few Christmas stockings. Moving between Smith’s home territory of north-west London to West Africa and New York, it spans the years from the 1980s to the present following two childhood friends who meet at a ballet class. ‘Dazzlingly energetic and deeply human, Swing Time is a story about friendship and music and stubborn roots, about how we are shaped by these things and how we can survive them’ say the publishers which reminds me of Kim Echlin’s wonderful, Under the Invisible Life, a novel which didn’t get nearly the attention it deserved.

The subject of Steven Amsterdam’s The Easy Way Out is something of an attention-grabber. It looks at assisted suicide through the experiences of Evan, a hospital nurse who helps people to die, something he keeps firmly under his hat from his friends. A tricky love life, his increasingly unwell mother and his supervisor’s concerns as he sails ever-closer to the wind in terms of morality and law add further spice in what the publishers describe as ‘a brilliantly funny and exquisitely sad novel that gets to the heart of one of the most difficult questions each of us may face: would you help someone die?’ ‘Brilliantly funny’ may be the best approach to engage readers with this dilemma with which many countries, including the UK, frequently wrestle but never manage to resolve.

Mette Jakobsen’s What the Light Hides explores suicide but in a rather different way. Vera and David live in the Blue Mountains, still passionately in love after twenty years of marriage. Jakobsen’s novel begins five months after their son apparently took his own life in Sydney where he was at university. Vera is coping but David cannot accept his son’s death, taking himself off to Sydney to try to make sense of things. ‘Mette Jakobsen’s gifts of delicate and empathetic observation are on display in this tender and moving novel’ say the publishers. I’ve read several excellent novels from the Australian Text Publishing and have high hopes for this one.

Linda Grant’s The Dark Circle sounds a world away from her last novel Upstairs at the Party which I loved. It’s set against the backdrop of a TB sanatorium in Kent at the beginning of the 1950s, where a teenage brother and sister ’living on the edge of the law… … discover that a cure is tantalisingly just out of reach and only by inciting wholesale rebellion can freedom be snatched’ according to the publisher. I haven’t enjoyed all of Grant’s novels but this sounds well worth a try.

Sara Stridsberg’s The Gravity of Love is set in another kind of hospital, just outside Stockholm. Jimmie Darling’s daughter visits her father in the psychiatric institution where he is in the charge of Edvard Winterson, happy to take his patients for the odd night out. When her mother disappears on holiday, the hospital becomes Jackie’s world and she makes the acquaintance of what sounds like a vivid cast of characters. ‘In Sara Stridsberg’s breathtakingly beautiful novel, the psychiatric hospital, set in a lovely park close to a lake, takes on near-mythic dimensions, both as an avenging angel and as a redeemer of lost souls’ say the publishers which sounds a little overblown but it’s been much praised in Stridsberg’s native Sweden.

Gerard Reve’s The Evenings is set in one of my favourite European cities which is one of its draws for me. It’s the story of ten evenings in the life of Frits van Egters as he walks the streets of post-war Amsterdam. That may seem a tad dull but it’s been voted one of the greatest novels of all time by the highly literary Dutch. Described by the publishers as ‘edgy, mesmerising, darkly ironical’ it sounds quite intriguing. 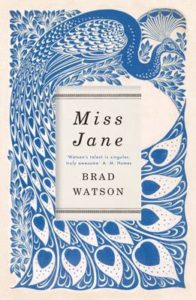 My last choice for November is Brad Watson’s Miss Jane which was inspired by the true story of Watson’s great-aunt, Jane Chisolm, born in rural Mississippi in the early twentieth century with, as the publishers put it, a ‘genital birth defect that would stand in the way of the central “uses” for a woman in that time and place – namely, sex and marriage’. ‘From the country doctor who adopts Jane to the hard tactile labour of farm life from the sensual and erotic world of nature around her to the boy who loved but was forced to leave her, the world of Miss Jane Chisolm is anything but barren’ continues the blurb. It sounds like an uplifting read which after several of the novels listed above may come as something of a welcome change.

That’s it for November. As ever a click on the title will take you to a full synopsis should you be interested. Paperbacks soon…