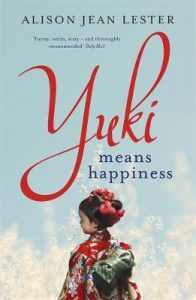 This second selection of January paperbacks begins with a title I’m not entirely sure about. In Alison Jean Lester’s Yuki Means Happiness a young woman leaves America for Japan, keen for adventure. She takes a job as a nanny to a two-year-old, immersing herself in the routine of the household and becoming increasingly attached to her charge until she comes to understand that the Yoshimura family isn’t quite what it seems. It sounds very different from the worldly Lillian on Life which is what led me to this one hence my doubts about it but Anne over at Annethology rates it highly as you can see from this review.

Books about and by children brought up in communes have a fascination for me. The best one I’ve read is Tim Guest’s A Life in Orange about his upbringing in an ashram. In Curly Oswald’s The Ballad of Curly Oswald, a man raised by an extended family of hippies looks back on his childhood from his hospital bed. It’s billed by its indie publishers as ‘an extraordinary chronicle of a lifestyle both alternative yet strangely viable, a microcosm of eccentricity, comedy and grotesque tragedy, told with the unflinching eye of a child and the sympathy of a narrator who sees the underlying humour of life in all its deranged glory.’ It’s not entirely clear whether the book is a novel or a memoir but presumably if it’s fiction it’s closely related to the author’s experience.

Moving on to the ‘80s, David Keenan’s This is Memorial Device is about two guys looking back on their fanboy days immersed in Airdrie’s post-punk scene. ’Featuring a cast of misfits, artists, drop-outs, small-town visionaries and musicians, This Is Memorial Device is a dark, witty novel depicting a moment where art and the demands it makes are as serious as life itself’ according to the blurb. Given that Keenan is both a musician and a critic, odds-on this one’s also a tad autobiographical and may be all the better for it.

Known as Bandi, the author of 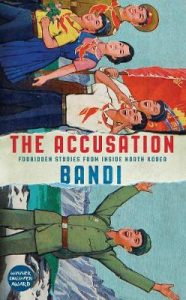 The Accusation risked his life to get this collection of short stories smuggled out of his native North Korea. Beginning in 1989, these are stories which highlight the grim plight of Bandi’s fellow citizens, throwing a much-needed light on this secretive country and its draconian regime. ‘The Accusation is a heartbreaking portrayal of the realities of life in North Korea. It is also a reminder that humanity can sustain hope even in the most desperate of circumstances – and that the courage of free thought has a power far beyond those seek to suppress it’ say the publishers. I feel duty bound to the author to read this one.

That’s it for January paperbacks. A click on a title will take you to a more detailed synopsis for any that have taken your fancy, and if you’d like to catch up with the first batch it’s here. January’s new titles are here and here.