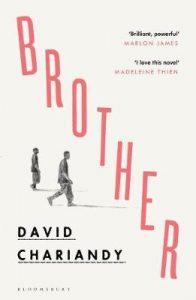 David Chariandy’s Brother is the second novel I’ve reviewed this year that I first spotted on Naomi’s Consumed by Ink, hoping that it would buck the British publishing trend of ignoring Canadian gems. The first was Katherena Vermette’s The Break, which lived up to the Margaret Atwood plaudit adorning its cover. Fingers crossed there’ll be more given the excellence of both the Vermette and Chariandy’s eloquent exploration of grief and loss set against a backdrop of urban immigrant poverty.

Michael has cared for his mother since the death of his older brother Francis, shutting himself off from the friends he and Francis once shared. When Aisha contacts him, telling him about her father’s death, he issues an uncharacteristic invitation triggering memories of the years leading up to Francis’ death. Born and raised in Canada, the brothers visited their mother’s Trinidadian home just once. Their Indian father had left when they were barely out of nappies. Determined to lift her two sons out of poverty and sensitive to the judgement of others, Ruth constantly drummed into them strict codes of behaviour and the need to do well at school. Just one year older than Michael, Francis was the cool one growing into a thoughtful man, protective of those he loved yet sassy and adventurous enough to attract the authorities’ attention. A shooting at the development where they lived marked a turning point for him, and for Michael. Francis began to spend more time with his friends, listening to music and falling in love with Jelly, a brilliant DJ in the making. When Aisha comes home, ten years after Francis’ death, it’s Jelly she invites back to the apartment Michael shares with his mother. Her clear-eyed perception offers Michael a way out of the cage of grief he’s locked himself into.

Brother packs a quietly powerful punch for such a short book. Chariandy explores themes of grief, racism and social deprivation, weaving. Michael’s memories of Francis through Aisha’s visit. The introductory page sets the tone for evocative often understated prose which ranges from the colourful – I will beat you so hard your children will bear scars. Your children’s children will feel! – to poetic observation: It was difficult not to feel something for him sitting there, catching snatches of sleep, other times growing old in the squinting smoke while the orders were shouted at him. Chariandy’s characterisation is both astute and compassionate: it’s impossible not to care deeply about what happens to these two young men, both bright and ambitious but thwarted by their circumstances. Brother was longlisted for last year’s Scotiabank Giller Prize, an award well worth looking out for. Competition must have been very stiff indeed for this beautifully crafted piece of fiction not to have made it onto the shortlist.

That’s it from me for a week or so. After a rather tough winter, H and I are off to Spain tomorrow evening in the hope of catching some sun, a bit of culture and reading one or two books.