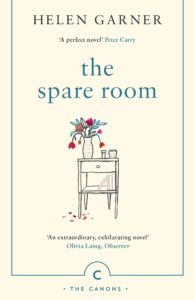 I’m sure this isn’t the first reread I’ve reviewed here but aside from Amy Bloom’s Rowing to Eden, which turned out to be made up of several collections of short stories, nothing comes to mind. Australian writer Helen Garner’s The Spare Room was published in 2008 and has recently been reissued. I remember reading it in proof and being impressed with it then and it’s lost none of its power in just over a decade since. Our narrator, Helen, has been asked by a much-loved friend if she can stay for three weeks while she undergoes treatment for cancer. What ensues will test the bounds of friendship to its limits.

Helen met Nicola fifteen years ago, becoming firm friends despite the distance between Nicola’s home in Sydney and Helen’s in Melbourne. Impressed by Nicola’s casual grace, bohemian life and independence, Helen tries not to appear shocked when she arrives, much diminished, or to seem astonished at her faith in the Theodore Institute which claims to cure cancer by administering large doses of vitamin C. Nicola breezily insists she can fend for herself but Helen is having none of it, sizing up the Institute as a bunch of charlatans while trying to keep an open mind for Nicola. As the weeks wear on, Helen becomes exhausted by the night sweats and bouts of pain that summon her to Nicola’s room, increasingly appalled by the wackiness of the Institute’s treatments, their prohibition of strong painkillers and her own mounting fury, both with the so-called doctors and with Nicola’s resolute belief in a cure. When Nicola’s niece, Iris, visits, Helen finds an ally. Between them, they convince Nicola to see an oncologist who advises surgery. At the end of the three weeks, their friendship has been strained but not yet snapped.

That night we took the bottle of Stoly down the rough path to the landing where, sitting on our jackets in the dark, we launched the long conversation that would become our friendship.

Garner’s sharp novella weighs in at just under 200 pages, drawing on her own experience of nursing a close friend to explore friendship, dying and the pernicious hope engendered by desperation. Helen’s anger rings out loud and clear against the cynical exploitation of the terminally ill and against Nicola’s insane optimism, a mask behind which she hides her terror. Glimmers of gallows humour lighten the subject’s grimness as Iris, Gab and Helen dissolve into hysteria, diffusing their fury at Nicola’s doggedly contrary attitude. Nicola is entirely believable: either monumentally selfish or brave in her determination – take your choice – but wholly human in her desperate need to hope. Helen counterbalances her beautifully, all practicality and organisation but helpless in the face of such need. Throughout it all flows compassion and love. Just as powerful the second time around, this is a clear-eyed view of death and our responses to it, explored through both the dying and the rest of us who must do what we can for them knowing that our turn will come.

20 thoughts on “The Spare Room by Helen Garner: Stretched to the limits”