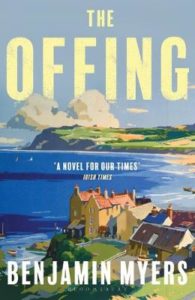 I’ve read three of the books featured in the second part of March’s paperback preview, beginning with a novel by an author I’ve been meaning to read for quite some time.  Benjamin Myers’ The Offing sees an old man remembering the summer after the Second World War when he tramped out of the pit village where his family lived for generations, eager for adventure. Along the way he meets Dulcie Price, a woman quite unlike anyone he’s met before. Robert camps in her overgrown field exchanging manual work for conversation until a friendship grows which will change both their lives irrevocably. Myers’ novel is filled with evocative descriptions of the natural world, while the forthright, eccentric Dulcie is a delight.

Lila Savage’s Say Say Say explores the relationship between caregivers, those they care for and their families through Ella, a bright young woman, close to thirty, Jill, the brain damaged woman she cares for, and Bryn, Jill’s devoted husband.  Ella is simply to sit with Jill, to ensure that she doesn’t harm herself. Through her head runs a multitude of concerns – about Jill, about Bryn and how he is coping, about the life they once had together and whether she’s fulfilling their needs – while fretting about what she should be doing with her own life. It’s a thoughtful, and compassionate meditation on the toll caregiving exacts, both on loved ones and professionals, which draws on the experience of more than a decade Savage spent as a caregiver.

Small town life is the setting for Elizabeth McCraken’s Bowlaway in which Bertha Truitt is found unconscious in a New England cemetery with a bowling ball, a candlepin and fifteen pounds of gold at the beginning of the twentieth century. From this intriguing start, she goes on to scandalize the town, eventually opening a bowling alley and changing it forever. ‘Elizabeth McCracken has written an epic family saga set against the backdrop of twentieth-century America. Bowlaway is both a stunning feat of language and a brilliant unravelling of a family’s myths and secrets, its passions and betrayals, and the ties that bind and the rifts that divide’ say the publishers which sounds just the ticket.

I’m rounding March off with two short story collections, one of which I should really have read by now. Julia Armfield’s salt slow was the Sunday Times Young Writer of the Year’s shadow judges wining choice. It focuses on women and their experiences in society, apparently, exploring themes of isolation, obsession and love. ‘Throughout the collection, women become insects, men turn to stone, a city becomes insomniac and bodies are picked apart to make up better ones. The mundane worlds of schools and sea-side towns are invaded and transformed, creating a landscape which is constantly shifting to hold on to the bodies of its inhabitants’ according to the publishers, bringing to mind Michael Andreasen’s 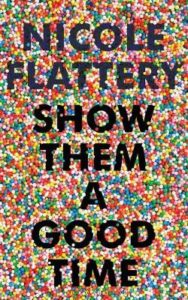 The Sea Beast Takes a Lover.

Like, Armfield, Nicole Flattery has been the recipient of The White Review Short Story Prize. Her Show Them a Good Time came garlanded with praise from Jon McGregor and Sally Rooney, both clearly smitten with Flattery’s writing. Comprising ten stories – some quite short, others lengthier and one which, at over ninety pages, is almost on its way to becoming a novella – her collection explores relationships, gender roles and trying to find a place for yourself in the world. Puzzling, sometimes disconcerting and a little off the wall, they’re oddly captivating, both funny and sad. I wasn’t entirely sure what to make of it but her collection certainly made an impression, and her writing is superb.

That’s it for March’s paperbacks. A click on a title will take you either to my review or to a more detailed synopsis for any that snag your attention, and if you’d like to catch up with the first batch it’s here while new novels are here and here.