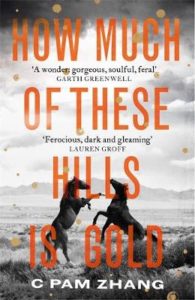 C Pam Zhang’s How Much of These Hills is Gold is one of those books about which there’s been a great deal of buzz in my Twitter timeline – not always a good thing, I know. It was the many and varied literary names singing its praises that first snagged my attention – everyone from Emma Donoghue to Garth Greenwell seemed to love it – but what really sold it to me was its unusual premise. Zhang’s debut is set in a reimagined American West in the grips of the Gold Rush, seen through the eyes of two orphans travelling through a land almost mythical in its beauty and promise.

Lucy and Sam are the children of Chinese parents. Born in America, their orphaned father was raised on stories of the West told by those who had lived there long before the arrival of gold-hungry settlers. He was a dreamer, a storyteller and a lover of the glorious landscape ravaged both by coal mining and gold prospecting. Their fiercely ambitious mother was a beauty who arrived from China unable to speak English, mistaking their father for the man in charge rather than the poor boy dragooned into teaching English to the two hundred Chinese hoping to make their fortunes. These two fell in love and begin an itinerant life, their father prospecting and too often gambling away what he found, their mother making a home at each stop. Lucy and Sam take very different paths – Sam accompanying their father to work, dressing as a boy and listening to his stories, Lucy going to school where she shines. First they lose their mother, then their father. Carrying their father with them, they journey through a landscape where buffalo bones lie and tigers are almost but not quite glimpsed until Sam finally accepts a burial ground for him.

Sun sucks them dry. Middle of the dry season, rain by now a distant memory. Their valley is bare dirt, halved by a wriggle of creek

This is such a confident debut, exploring themes of family, home – or the lack of – and otherness through the experience of a Chinese family, three of whom are American but rarely accepted as such. Zhang’s writing is starkly beautiful, describing both the majesty of a landscape steeped in dreams and its despoliation by those intent on wealth. Much of Sam and Lucy’s story is told from Lucy’s perspective, their father’s voice illuminating her understanding of his relationship with her mother and her mother’s part in their story. Both parents share a longing for home but not where or what form that home will take. Both have a dream of America, each very different from the other but neither acceptable to the white men who dismiss them as ‘savages’. Their children’s dreams are equally different but as their father always told them, family comes first and so it proves to be. Worthy of all that starry approbation, Zhang’s novel reworks the tired old Western genre into something thought-provoking, beautiful and original.

22 thoughts on “How Much of These Hills is Gold by C Pam Zhang: ‘What Makes a Home a Home?’”