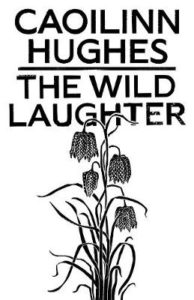 Caoilinn Hughes’ debut, The Orchid and the Wasp, made a quite a splash in the literary pool when it was published back in 2018. I started it but couldn’t get on with the style so was in two minds whether to read The Wild Laughter when it turned up but Cathy at 746 Books rated it very highly and she knows a thing or three about Irish fiction. Beginning in the roaring Celtic Tiger years of the early noughties, Hughes’ novella explores family, faith and death through the Blacks who are faced with an agonising dilemma a decade after the book began.

Hart and Cormac are brothers: one good-looking but apparently not blessed with brains, the other a smart know-it-all, always keen to humiliate his younger sibling. The Chief, as Hart and Cormac think of their father, took on the running of their farm when he lost his family in a fire, aged sixteen. Hart takes his turn helping his father while Cormac excuses himself, his eyes fixed on escaping to the city. When the Chief is gulled into buying property abroad on the eve of the 2008 crash, both brothers together with their cousin take a cruel revenge on the perpetrator only to find they’ve played straight into his hands. Cormac eventually makes his getaway, becoming an engineer while Hart stays at home working on the farm, his father increasingly hard pressed as the crash bites deep. They’re a family quietly held together by the Chief, their insistently pious mother distant and guarding her past. Even when it’s clear he’s mortally ill, the Chief continues to work, chipping away at the debts that have ruined him. As cancer ravages his body, he makes an oblique request to his sons which they both interpret in the same way. The question is how to accomplish it and who will bear the brunt.

As I say, I didn’t resent him his mind. Early on, its potential was fearsome, but he cached it away too long, until it curdled

Hughes’ narrates her novel from Hart’s perspective, engaging our sympathy for this younger brother, the constant butt of Cormac’s sharp tongue and incessant need to be right. Hart looks up to his father, keeping out of his mother’s way and dismissed as a dullard by Cormac who is only too keen to enlist his help when he needs it. Hughes’ paints a vivid picture of an Ireland first caught up in greed then brought to its knees by the crash and its fallout. There’s a rich vein of very black humour running through this novel until it reaches its sombre closing chapters. Once again, I found Hughes’ vernacular style tricky at first but grew accustomed to it, enjoying her sardonic, snarky observations and wondering if I should give The Orchid and the Wasp another try. A smartly delivered piece of tragicomedy which tackles an issue we all need to confront whether we have faith or not.

6 thoughts on “The Wild Laughter by Caoilinn Hughes: Brotherly love, or the lack of it”