Just a one-part paperback preview for September, disappointingly, albeit a reasonably long one including two books I’ve already read. I’m starting with Margaret Atwood’s joint Booker Prize-winning sequel to The Handmaid’s Tale, The Testaments, more because I’d find it difficult to leave it out than because I’m looking forward to it. Truth be told, I’m wary of sequels in the same way I’m wary of unpublished novels found mouldering in dusty desk drawers but many whose opinions I trust loved this novel which Atwood wrote in response to both her readers’ pleas and the state of the world, even bleaker now than when it was first published.

Here’s another I was in two minds about until Rebecca at Bookish Beck recommended it in one of my small publishers posts. Kathy O’Shaughnessy’s debut, In Love with George Eliot, reimagines the celebrated author’s life, first as a scandalous figure then as a national treasure. Meanwhile, in the present day two women compete in their interpretations of Eliot’s life. Rebecca describes literary editor O’Shaugnessy’s novel as ‘a book within a book’ in her review which you can read here.

Africans over 1,500 miles to the sea so that he can be buried in his own country in Petina Gappah’s Out of Darkness, Shining Light. Gappah concentrates on the funeral procession rather than Livingstone, apparently, giving voice to his cook and three of his most devoted servants. ‘Their tale of how his corpse was borne out of nineteenth-century Africa – carrying the maps that sowed the seeds of the continent’s brutal colonisation – has the power of myth’ say the publishers of what sounds like a novel that deserves the rather over-used description ‘epic’. I still haven’t got around to Gappah’s short stories despite being so impressed by The Book of Memory back in 2015.

Francine Toon’s Pine takes us to Livingstone’s homeland with its setting in a remote Scottish village in the middle of a forest where Lauren lives with her father. When a woman stumbles in front of their pickup at Halloween, Niall takes her back to their house but by morning she’s gone. She’s not the first woman to have disappeared in this place where people keep their secrets to themselves, nor is she the last, apparently. ‘Francine Toon captures the wildness of rural childhood and the intensity of small- 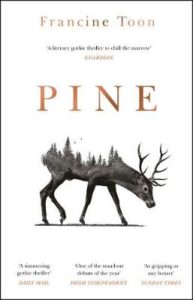 town claustrophobia. In a place that can feel like the edge of the word, she unites the chill of the modern gothic with the pulse of a thriller’ according to the publishers. Have to admit to being seduced by the cover of this one.

Rachel Donohue’s The Temple House Vanishing also has a touch of the gothic with one foot in thriller territory, exploring themes of love, betrayal and jealousy in the eponymous Temple House, once a grand mansion now a Catholic school for girls. Twenty-five years after the disappearance of a sixteen-year-old scholarship girl and her art teacher, a young journalist has decided to write a series of articles about the case, more in an attempt to understand its circumstances than to solve it. It took me a little while to become absorbed in Donohue’s novel but once hooked the mystery of what happened to Louisa and Mr Lavelle kept me going.

Entirely different, Ocean Vuong’s On Earth We’re Briefly Gorgeous takes the form of a letter from a son to his mother who cannot read, telling her the story of his life and exploring the family’s history in Vietnam before he was born. ‘At once a witness to the fraught yet undeniable love between a single mother and her son, it is also a brutally honest exploration of race, class, and masculinity… … With stunning urgency and grace, Ocean Vuong writes of people caught between disparate worlds, and asks how we heal and rescue one another without forsaking who we are. The question of how to survive, and how to make of it a kind of joy, powers the most important debut novel of many years’ say the publishers in the somewhat overwrought blurb. It does sound extraordinary, though, and I’ve a weakness for novels by poets.

Unusually for me, I’m finishing this paperback preview with a piece of non-fiction by one of my favourite novelists. Like Vuong’s book, Elizabeth Hay’s All Things Consoled is about her relationship with her parents, in particular her mother, which becomes increasingly strained when they move into a retirement home just down the road from Hay and her husband. Some of Hay’s descriptions will be all too painfully familiar to those whose own parents have endured a long decline or seen others at close quarters – hard enough when the relationship has been a good one. It reminded me of Blake Morrison’s long-ago bestseller And When Did You Last See Your Father? No small compliment.

That’s it for September’s paperbacks. As ever, a click on a title will take you either to my review or to a more detailed synopsis, and if you’d like to catch up with the month’s new fiction it’s here. Fingers crossed there’ll be an abundance of October treats to look out for.

25 thoughts on “Paperbacks to Look Out for in September 2020”