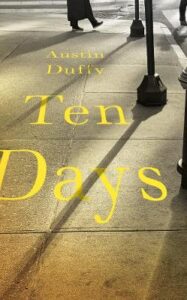 Back in March 2016, which seems a very long time ago now for all sorts of reasons, I reviewed Austin Duffy’s debut, This Living and Immortal Thing, ending by saying I was looking forward to his second novel if he found time to write it – he’s an oncologist. As enthusiastic readers of first novels know only too well, the second often falls flat. Not so with Duffy. Ten Days follows Wolf as he takes his teenage daughter to New York City after the death of her mother whose reluctant family are set to scatter her ashes over the Hudson on Yom Kippur in accordance with her wishes.

Ruth stirred, and for a brief second she looked at him with her dark, almost black eyes. It was as if they were peering at each other across the divide of species

When Miriam was diagnosed with ovarian cancer she turned to Wolf, her philandering husband who had long since left her. Wolf moved back into their London home, looking after Miriam while accepting his teenage daughter’s barbs as his due. Miriam had wished to be cremated, asking Wolf to scatter her ashes in New York despite her conservative Jewish family’s protests. Wolf travels with Ruth back to the city where he and Miriam met, a detailed itinerary of their every move over the next ten days to hand. First there’s family dinner to get through, Miriam’s brother making his usual dramatic late entrance, looking daggers at Wolf. Wolf suggests to Ruth they visit the places that meant most to him and her mother to which she agrees, apparently grudgingly but beneath the thick carapace of protective irony she’s donned he senses an eagerness. As father and daughter make their way through the ten days between Rosh Hashanah and Yom Kippur it becomes clear that all is not well with Wolf, his increasing vagueness a source of concern even to the determinedly distant Ruth. By the end of the novel, Wolf has done the best he can to ensure Ruth’s future and, inadvertently, his own.

There was nothing left and she might as well see this, it was after all what he was at the end of the day, a crying man who regretted almost everything

Duffy’s second novel is marked by the same empathy and humanity that made his first such a compelling read for me. He depicts Wolf’s increasing disorientation and Ruth’s impatience with her father, discomfitingly well so that when the reason is revealed we know what it is already. His novel’s overarching themes of grief and memory are poignantly explored, both through Wolf’s strained relationship with his daughter and through his memories of her mother coupled with an awareness of how much he hurt her. Compassionate and engrossing, it’s a most affecting novel which draws to a close on a pleasing note of redemption. Any concerns about that old second novel syndrome proved to be unfounded which leaves me confidently looking forward to the third.