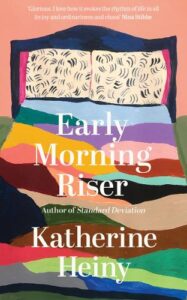 Lots of pre-publication brouhaha in my neck of the Twitter woods around Katherine Heiny’s Early Morning Riser which so often leads to disappointment but something about its blurb made me think it might live up to that promise so I put up my hand for a copy. Set in a small American town, always a lure for me, it follows Jane who meets the handsome Duncan when she locks herself out of the house dressed in her pyjamas.

The conversation was like the apple dumplings, perfectly crimped around the edges and and sealed off. Jane couldn’t get in

Jane is the newly appointed second grade teacher at Boyne City’s school. She loves to visit the local thrift store, adapting the clothes she finds there although never quite getting them right, often lighting on knickknacks she’s sure will add style to her home. Duncan is the furniture restorer with a sideline in locksmithing who answers her call for help, handsome and easy company. These two seem made for each other, so Jane thinks, and they slip into a relationship which she hopes will progress to love. There is one fly in the ointment: Duncan seems to have slept with just about every woman in Boyne City and beyond. Jane finds herself constantly faced with one of Duncan’s exs, an endless source of speculation when he’s not with her, not least his beautiful ex-wife with whom Duncan continued to sleep even after her marriage to the distinctly odd Gary. Duncan makes no secret of his plans to never marry again but Jane’s undeterred. Over the seventeen years Heiny’s novel spans, Jane will continue to yearn for romantic love – although not always for herself – pick up a burden of guilt that leads to more happiness than she’d hoped for and, ultimately, experience a quietly joyous epiphany.

Sometimes when Duncan talked all evening about lumber, or table legs, or the art of modern woodworking in general, Jane told herself that if they were married, she would feel like killing her own husband

I’ve left that synopsis as sketchy as I can while giving a flavour of this lovely, funny and absorbing novel. So much of its enjoyment for me were the small shocks which move Jane’s life in a different direction. Heiny combines Anne Tyler’s sharp social observation with a pleasingly sly wit. Her often idiosyncratic characters are affectionately portrayed, particularly Jane from whose sometimes puzzled perspective the story is told. Boyne City is smartly drawn, the kind of place where the bowl bought at the local thrift shop housing an artful arrangement of dried flowers turns out to be a wedding present given to one of your dinner party guests, now divorced. I loved it. Undemanding but immensely enjoyable, it’s the perfect novel to lose yourself in when times are tough, and the ending is a delight.

18 thoughts on “Early Morning Riser by Katherine Heiny: If you like Anne Tyler…”