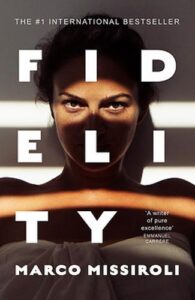 I was attracted to Marco Missiroli’s Fidelity by its title thinking it might make an interesting companion to Sue Miller’s Monogamy which I so enjoyed last year. That and its jacket with those eyes staring so directly at the camera. Set in Milan, it spans nine years in the lives of a husband and wife, beginning in 2009 when, in their mid-thirties and childless, they’re facing their first marital crisis.

What if betrayal had been his way of coming back to fidelity to Margherita?

Carlo has committed an indiscretion with one of his students, referred to by both Carlo and Margherita as ‘the misunderstanding’. Theirs is a happy marriage, still filled with desire, but Carlo has begun to wonder what it might feel like to be unfaithful. Margherita becomes obsessed with Sofia even after she drops out of her course after Carlo’s failure to recognise the short story she’s submitted as her own tragedy. She begins to entertain fantasies focussed on Andrea, her physiotherapist who has his own sexual difficulties to overcome. The background hum of their lives together continues – Margherita’s visits to her widowed mother and her determination to buy one of the apartments in her real estate listings, not averse to a little crooked dealing to get it; Carlo topping up his part-time teaching by writing travel guides, frustrated by his inability to produce a novel. Nine years later, now installed in the longed-for apartment with their son, the old obsession is rekindled when Carlo begins to receive parcels of books from Rimini, Sofia’s home town.

Missiroli explores his theme of marital fidelity through Carlo, Margherita, Andrea, Sofia and Margherita’s mother Anna against a background of everyday family life. It took me a little while to become accustomed to his style, slipping perspectives between each of these five, often in continuous prose, but patience paid off. Carlo and Margherita each find their way to accommodate their different attitudes to fidelity, although not without cost, while Sofia, Andrea and Anna’s stories amplify Missiroli’s theme. All five are perceptively drawn – their desires, frustrations, ambitions and longings – but Anna is the most touchingly portrayed though memories of her own marriage and the suppression of her ambitions. In the end, it’s as much a novel about the push and pull of family love and loyalties as it is about desire and fidelity. An accomplished piece of fiction, if a slow burner for me, firmly rooted in Milan, a city I’d planned to visit last year before the coronavirus took charge of the world. Maybe next year…