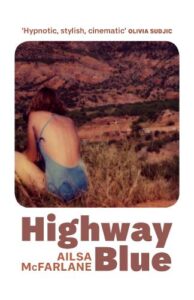 I first noticed Ailsa McFarlane’s Highway Blue in The Observer’s ’10 Best Debuts of 2021’ feature at the beginning of the year. Inevitably, given my weakness for first novels, several titles expanded my TBR list but McFarlane’s is the first I’ve read. Highway Blue follows Anne Marie and her estranged husband Cal who are on the run after a dramatic encounter.

He called me beautiful and his skin tasted of the hot salt of his sweat. And I was caught, I was caught in all of it and floating in happy looseness, and for the first time in my life it didn’t feel like I was suffocating

Anne Marie lives in a house with four other young women, all friends apart from her. Cal walked out two years ago with no warning leaving her empty and numb. Her cousin checks on her now and again but other than that her life consists of bar work and trying to lose herself in other men’s beds. When Cal turns up out of the blue, Anne Marie is wary and with reason. Soon, they’re on the run, one of them having shot dead the man pursuing Cal. As the couple heads south, first hitching lifts then driving the old wreck Cal picks up from a friend, Anne Marie reflects on this short marriage to a man she loves dearly but who has hollowed out her already troubled life, scarred by the death of her mother when she was fifteen. Their journey ends in the city where Anne Marie’s mother grew up.

Superlatives are two a penny in book blurbs, ‘devastating’ being one over used description but in this case it’s entirely appropriate. Delivered in uncluttered, brief sentences from which the occasional gorgeous descriptive paragraph shines out, Anne Marie’s narrative echoes her own pared back existence. The effect is an aching loneliness which suffuses this powerful novella. Much is left unsaid as Anne Marie’s story unfolds but it’s clear that the loss of her mother has left a yawning gap that she hoped Cal would fill. In terms of a dysfunctional love story you could compare it with Gwendoline Riley’s much praised First Love but the quality of McFarlane’s writing eclipses that. An extraordinary debut, bleakly beautiful. I’m already eagerly awaiting her next book.