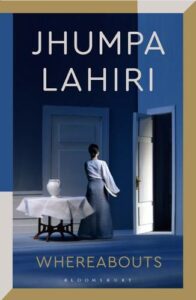 Four years ago, I was sent a book by Jhumpa Lahiri which had intrigued me when I saw it listed as a translated work. In Other Words is her account of a passion for the Italian language so intense she uprooted her family from the US so that she could immerse herself in it. The memoir was written in Italian, then translated by Anne Goldstein. Lahiri has since translated other writers’ work, including Domenico Starnone’s Ties which begins with a memorably explosive burst of anger. Whereabouts was also written in Italian but this time translated by herself. This elegantly slim novella records a year or so in the life of a middle-aged woman who lives on the fringes of other people’s worlds.

Even though it’s Saturday there’s still a dash of elegance to how people are dressed: the bold shade of a jacket, a bright scarf, the tight lines of a dress. It feels like a party effortlessly organised at the last minute

Our unnamed narrator has lived in the same city since she was born. She’s an only child, the daughter of a mother with whom she had a fractious relationship as a child, and a distant father, struck down with a fever on the eve of a birthday visit to the theatre. Her only serious relationship ended after five years in the discovery of betrayal. Her friends envy her quiet, self-contained life, their own filled with the bustle and mess of family while she looks on fastidiously. As she walks through the streets she’s known all her life, she speculates about the people she sees, embroidering lives for them while they treat her with courtesy but little else. When she understands that an infatuation she’s been considering with a friend’s husband is unrequited she decides to push the boundaries of her attenuated life, accepting a fellowship in a neighbouring country. As she travels on the train, sitting neatly, quietly reading her book, a family enters her carriage, noisy and generous with each other, politely apologising for their clamour when they get off, leaving her to her regret at not joining them in the picnic they’d offered to share.

Solitude demands a precise assessment of time, I’ve always understood this. It’s like the money in your wallet: you need to know how much time you need to kill, how much to spend before dinner, what’s left over before going to bed

This is such a keenly observed piece of writing, suffused with a melancholy solitude occasionally broken by encounters with friends, colleagues and dutiful visits to our narrator’s mother. Lahiri’s prose is beautiful in its simplicity, descriptions of the unnamed Italian city in which her novel is set singing out from the page. Poetic, impressionistic vignettes, convey our narrator’s life and character – her disgust at the clutter of the hotel room in which she must spend three miserable days during an academic conference; her shame at her uncharacteristic outburst at a dinner party; her daily walk past the commemorative plaque to a man she never knew but often contemplates. Small details are slipped in so that we come to understand why our narrator’s life is so circumscribed, forever the outsider living off the scraps of others. In its precise, understated beauty, Lahiri’s novella reminded me of Mary Costello’s Academy Street: high praise indeed from me.

35 thoughts on “Whereabouts by Jhumpa Lahiri (transl. by the author): ’Solitude: it’s become my trade’”