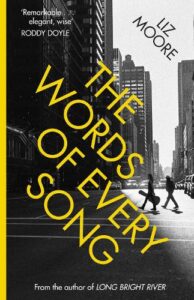 Way back in 2012, I read Liz Moore’s second novel, Heft, which I remember enjoying although, so many books having passed under the bridge since then, not much else. When I spotted The Words of Every Song in the schedules I hadn’t realised it was her debut, attracted by its New York music scene setting. No doubt it’s been reissued thanks to President Obama’s ringing endorsement of last year’s Long Bright River but it’s a novel well worth reviving in its own right. It follows the careers of several acts signed by the Titan label over a couple of years, exploring the fickleness of the music business and the toll taken on those who work in it.

But Lenore, as she looks out at the crowd, shows nothing but a sort of affected passion for the music: her brow furrowed the right way, her right foot pounding the floor in time to the music – the right way

Theo works in A & R, under increasing pressure from his boss to make a signing. He’s been fostering the Burn for some time, knowing that they’re not what Jax had in mind but loving their music. Their first album meets with a degree of success but nothing that will put them in the same league as Tommy Mays, Titan’s flagship performer currently struggling with a drink problem and the pull of his young family. Jax’s secretary Cynthia has recently been acting as a receptionist, dreading the visits of Lenore Lamont, Titan’s rising star, who dumped her after four years. Once the Burn are signed, Theo’s well aware that Jax needs placating, relieved when a teenage girl band turns out to be better than expected and snapping them up much to their astonishment. Over the two years the novel spans, chance and caprice, hype and schmoozing, all play their part in the fates of these artistes’ careers ending with an unexpected, spectacular success and fame on the horizon for one of them.

Apart from its setting, the other attraction of Moore’s novel for me was its structure which takes the form of an intricately interlinked set of stories. Each character’s piece of the jigsaw neatly slots in, from the sound technician apprehensively looking forward to meeting his ex-wife to Jax’s parents, the wealthy owners of a Manhattan brownstone who know nothing of her world. Backstories are lightly sketched in and futures are foreshadowed. Characters flit in and out of each other’s stories. It all works beautifully. Moore makes no bones about the cost of being a player on the music scene, the potential for crash and burn, the constant pressure and insecurity, and the chaotic lives led. A thoroughly enjoyable novel, quietly accomplished, that made me want to get my hands on a copy Long Bright River.

10 thoughts on “The Words of Every Song by Liz Moore: Living the dream, or perhaps not”