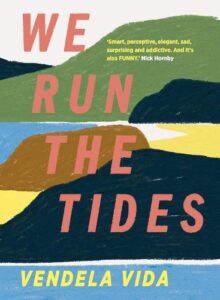 I ended my review of Vendela Vida’s The Diver’s Clothes Lie Entry back in 2015, pleased to find she had a backlist to explore. Needless to say, too many bright, shiny new books got in the way so I was delighted when We Run the Tides arrived through the letterbox. Set in a wealthy San Franciscan neighbourhood in the 1980s, Vida’s new novel follows four young girls through the summer which will mark them for life.

We tried to remain humble but we were heroes

All four are close friends, attending the Spragg School for Girls favoured by their comfortably off parents, but it’s Eulabee and Maria Fabiola who are inseparable, striding through Sea Cliffs as if they own it, often getting themselves into scrapes. One day in 1984, when the four are on their way to school, they spot a man in a white car, a stranger who Maria Fabiola says is touching himself while watching them. Eulabee sees no such thing, sticking to her story when each of them is interviewed by the police while Julia and Faith favour Maria Fabiola’s version. Eulabee finds herself ostracised, her previously happy life unravelling as invitations are withdrawn and the low hiss of snide remarks follows her along the school corridors, not least from Maria Fabiola. Then Maria Fabiola disappears apparently kidnapped, returning on Christmas Day wrapped in a blanket. One night, convinced she’s brought about a calamity, Eulabee takes refuge in the shelter their ballet teacher offered should she and Maria Fabiola need it, emerging to find herself the subject of media reports of a second disappearance. By the end of the summer, Eulabee will have reassessed her friendship with Maria Fabiola but another disappearance will ensure that this summer casts a darker shadow on all their lives.

This is what it’s come to. I am a childhood neighbour, nothing more

Vida narrates this absorbing coming-of-age tale through Eulabee’s voice, smartly capturing the heady intensity of adolescent girls’ friendship. Maria Fabiola’s voluptuous beauty and the floodlight of male attention it attracts comes as a surprise to Eulabee, anxious about her own body as teenage girls so often are and more accustomed to thinking of her friend as a partner in mischief. She’s an astute observer, slyly witty, but there’s poignancy about her voice that conveys the hurt of being excluded and the insecurity of emerging sexuality. Vida revisits the friendship, the consequences of which have dogged Eulabee throughout her life, in a revealing chance encounter between the two women, now fifty. So often, catch-up sections in this sort of novel feel clunky, only added to bring things to a close, but Vida handles it smoothly and satisfyingly. A thoroughly enjoyable novel, both immersive and perceptive.

15 thoughts on “We Run the Tides by Vendela Vida: Beauty and truth, or the lack of it”