Saturday we had ten minutes to spare at the station. I walked into W H Smiths and H gave a barely audible sigh. Now that I’m no longer a reviews editor I think he’d got it into his head that I might get the TBR pile under control. Ron Rash’s Nothing Gold Can Stay caught my eye immediately. How could I not know about a new novel from Mr Rash? The Cove was one of the best things I read last year. Along with Kent Haruf, Rash’s pared down, spare prose is right up my alley. I grabbed a copy along with M L Stedman’s The Light Between Oceans, paid and headed for the train. Once ensconced, I took a closer look at the book and the penny dropped – it’s a collection of short stories. My turn to sigh this time. I know that there are many readers out there who think that the short story is a superior form to the novel and in terms of skill I can see their point but I struggle to work up the same kind of eager anticipation that I have for a favourite author’s novel. Perhaps it’s because I read too fast so that the stories tend to blur into 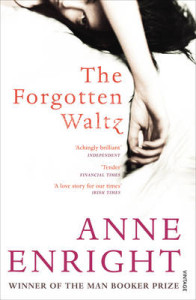 one another, then I forget them. Or perhaps it’s because I like to be drawn into a narrative and dislike being dumped at the end of ten pages. Whatever it is, I realise it’s my loss, and I have read some excellent collections – Annie Proulx’s Close Range comes to mind as does Polly Sampson’s Perfect Lives. Anyway, the Rash is now on the TBR shelves.

Yesterday I finished The Forgotten Waltz by Anne Enright, no slouch herself when it comes to short stories. It’s about an affair between a young woman and an older man set in Dublin just before and after the 2008 crash.  The affair follows the usual trajectory – flirtation, passion, living together, disenchantment – which makes it sound like tens of other books you may have read before but Enright’s style is such that Gina Moynihan’s recollection of how she and Seán Valleley came together and apart engages absolutely. She catches the Dublin lilt perfectly so that Gina’s voice sings out. Even the chapter headings are slightly cheesy song titles giving the whole thing a nicely wry, self mocking tone. Wonderful stuff!