This instalment leapfrogs over June, much of which was spent on a lengthy railway jaunt which took me from Amsterdam to Warsaw. July saw the start of a long and lovely British summer, and two excellent debuts beginning with Jen Beagin’s smart, funny, Pretend I’m Dead, about twenty-four-year-old Mona who cleans houses for a living, falls hard for a junkie who disappears then takes herself off to Taos. Nothing much happens in Beagin’s novel: it’s all about the characters, not least Mona from whose sharply sardonic perspective the novel unfolds. Little bombs are dropped into the narrative revealing a childhood that has led her to jump to dark conclusions about her clients. There are some great slapstick moments and it’s stuffed with pithy one-liners. I loved this novel with its dark, witty and confident writing. Can’t wait to see what Beagin comes up with next.

Sonia Zinovieff’s Putney also explores the fallout of childhood abuse through Ralph who’s aroused by Daphne’s boyish beauty when she is nine and he is twenty-seven. It’s the ’70s and Daphne is the child of bohemian parents caught up in their own affairs, looking anywhere but at what is happening under their noses. Forty years later, Ralph is oblivious to Daphne’s chaotic, rackety life while she works on a collage commemorating her time with him in a flat a mere stone’s throw away from her childhood home. This subject could so easily have been mishandled. Salacious details, stereotypical characters, black and white judgements – it’s a minefield but Zinovieff explores her subject with consummate skill in a thoroughly accomplished novel, both thought-provoking and absorbing. I take my hat off to its author for tackling such a tricky subject with compassion and intelligence.

August got off to a much more lighthearted start with Lissa Evans’ Old Baggage which tells the story of Mattie, once met never forgotten, picking it up in 1928, ten years after British women who met a property qualification were enfranchised. For many in the women’s suffrage movement the battle’s over but not for Mattie. Evans’ novel is an absolute treat. Her story romps along replete with period detail, wearing its historical veracity lightly while exploring themes of social justice 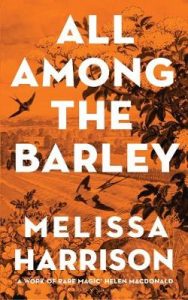 with wit, humour and compassion. For those of us struggling with the current political climate, Old Baggage is a happy reminder that things can get better.

Melissa Harrison’s All Among the Barley could be said to be a counterweight to that hope. Set in the early ‘30s it’s about a young woman who turns up in the village of Elmbourne and inveigles herself into the affections of a vulnerable fourteen-year-old girl. Naïve yet intelligent, Edie’s flattered by Constance’s attentions but not savvy enough to examine her motives. Constance’s romantic views of the countryside reveal a nostalgia for a world that never existed rather than concern for those who live there. Harrison sets her novel against a febrile background: suspicion of change, economic hardship and fear of the other leave Elmbourne prey to the shadowy forces of fascism gathering throughout Europe. As with all of Harrison’s novels, there’s a plethora of gorgeous descriptive passages to enjoy.

September began with a novel that I’d have to had to find a hat to eat had I not enjoyed it. Kate Atkinson’s Transcription follows Juliet Armstrong who finds herself caught up in the machinations of MI5, far beyond the mundane transcriptions she’s recruited to produce in 1940. Atkinson is a masterful storyteller, whipping the carpet from underneath her readers’ feet several times during Juliet’s journey through the labyrinthine corridors of MI5. As ever, there’s a good deal of dry, playful wit to enjoy but some serious points are made about idealism and national interest some of which rang loud contemporary bells for me. Engrossing storytelling, engaging characters, sharp observation and sly humour – all those sky-high expectations that greet the announcement of any new Atkinson novel were more than met for me. Bring on all the prizes.

You’d think I might end on that high note but there’s one more September title: Sarah Moss’ Ghost Wall is a powerful exploration of controlling violence and its consequences, all wrapped up in a tense, atmospheric piece of storytelling. Together with three students and their professor, seventeen-year-old Sylvie and her parents, Bill and Alison, spend the summer living as Ancient Britons in the shadow of Hadrian’s Wall. Bill’s menacing control of both Sylvie and Alison pervades the book offset with a degree of waspish humour and gloriously evocative descriptions of the summer landscape. The climax is horrifying: hard to read yet impossible to tear yourself away from it. Another in the succession of novellas that have so impressed me.

That’s the end of summer which I found particularly hard to let go this year although autumn put on a pretty good show, both for weather and books.

All links are to my reviews on this blog. If you’d like to catch up with the first two books of the year posts they’re here and here. And for those of you who’re flagging, it’s the home straight on Monday.