I’m not one for wackiness, tending to run in the opposite direction at the mere mention of magic realism. I hope that description doesn’t put you off but I can’t think of a more apposite word: whimsical doesn’t cover it as you’ll see from the list below. Here then are five novels I’ve read with more than a touch of the surreal, all with links to reviews on this blog. 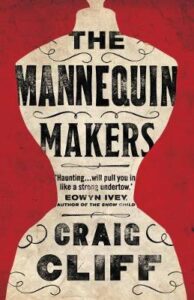 I’m breaking in the more sceptical amongst you gently with Craig Cliff’s inventive, imaginative piece of storytelling, The Mannequin Makers, which perhaps ought to be described as gothic rather than wacky but to explain why would be giving the game away. The loss of his wife while giving birth to their twins sends mannequin maker Colton Kemp spiralling into madness, unable to speak of her death. That same night, a German strongman makes an appearance in the town. As Colton watches Sandow showcasing total control of his muscles, a plan emerges which will materialise sixteen years later. It will be the culmination of his intense rivalry with Gabriel Doig, known as The Carpenter, whose uncannily lifelike models adorn Marumaru’s second department store’s windows. A ships’ carver from Scotland, Doig has his own strange story to tell. He’s lived in Marumaru for two decades when a series of tableaux in Donaldson’s windows catch his eye. Can it possibly be what he thinks it is? Cliff’s novel tells not just one but several stories, all woven neatly into a gripping narrative.

Much of Doig’s story takes place on board ship reminding me of the titular story in Michael Andreasen’s strange, wonderful but undoubtedly wacky collection of twelve stories, The Sea Beast Takes a Lover, in which a crew looks on helplessly, quarrelling amongst themselves, fretting about their cannibalistic admiral and being propositioned by mermaids as a many tentacled sea monster tightens her grip on what she hopes is her new lover. From the get-go you know you’re in discombobulating territory as a loving son remembers the many happy times they have shared before his father is crated up in his wheelchair and dropped into the sea. One of my favourites has a group of saints manifested in a parlour, hampered by their idiosyncrasies, from Saint Tongue of Flame who consumes half a bottle of whisky with disastrous results to Saint Upside-down Skull who has no one to heal. I could go on but that will give you a flavour of this surreal, often very funny collection. It’s the kind of book you’ll either love or hate but don’t assume which of those two categories you’ll fall into. You may find yourself surprised. 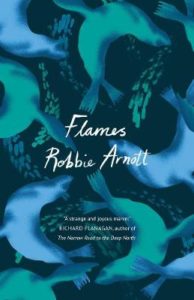 As I was when I read Robbie Arnott’s Flames about which I was extremely sceptical but which turned out to be one of my books of 2018. Steeped in fantasy and folklore, Arnott’s debut begins with the reappearance of Edith McAllister, two days dead. The McAllister women have a history of resurrection, appearing covered in barnacles or vegetation after they’ve been cremated, only to burst into flames a few days later. It comes as no surprise, then, when Edith repeats the pattern but her son is determined that his sister will escape the same fate. Told from a variety of perspectives – from a water-rat king to a foul-mouthed coffin maker, a man-made of fire to another driven mad by it – it could very easily have had me tossing it aside after a few pages but Arnott drew me in with his gorgeous writing. Another lesson in overcoming my prejudices.

Fire features in Kevin Wilson’s Nothing to See Here, too, although this time it’s flammable children rather than reincarnated women. Wilson’s novel tells the story of Lillian, still reeling from the betrayal by her best friend which wrecked her life, who nevertheless responds to that friend’s call for help. It’s also about two children who burst into flames when agitated. Wilson narrates his story in Lillian’s funny, often snarky voice as she tries to find ways to keep Bessie and Roland fire-free, offering them the love and security that, like her, they’ve sorely lacked despite having no clue how to set about it. It’s an absolute treat – funny, heartrending and wholly original. If the prospect of spontaneously combusting children puts you off, I’d ignore it. You soon get used to the idea. 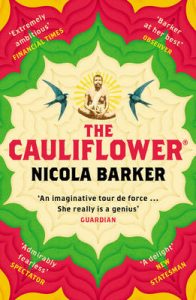 If you’ve read anything by Nicola Barker you won’t be surprised to find one of her novels included in this post. The Cauliflower®  is her extraordinarily inventive, idiosyncratic interpretation of the sketchy story of Sri Ramakrishna – an avatar, widely regarded as having played a leading role in reviving Hinduism. Pointless to attempt a detailed synopsis. Suffice to say there are two narrative strands, neither chronological, punctuated with haiku and extracts from the Song of Solomon together with a multitude of diversions and devices. Barker frequently pulls the rug out from underneath her readers’ feet, contradicting and questioning what has gone before. It’s often very funny not to mention vivid. I enjoyed it very much but you may find yourself flinging it across the room.